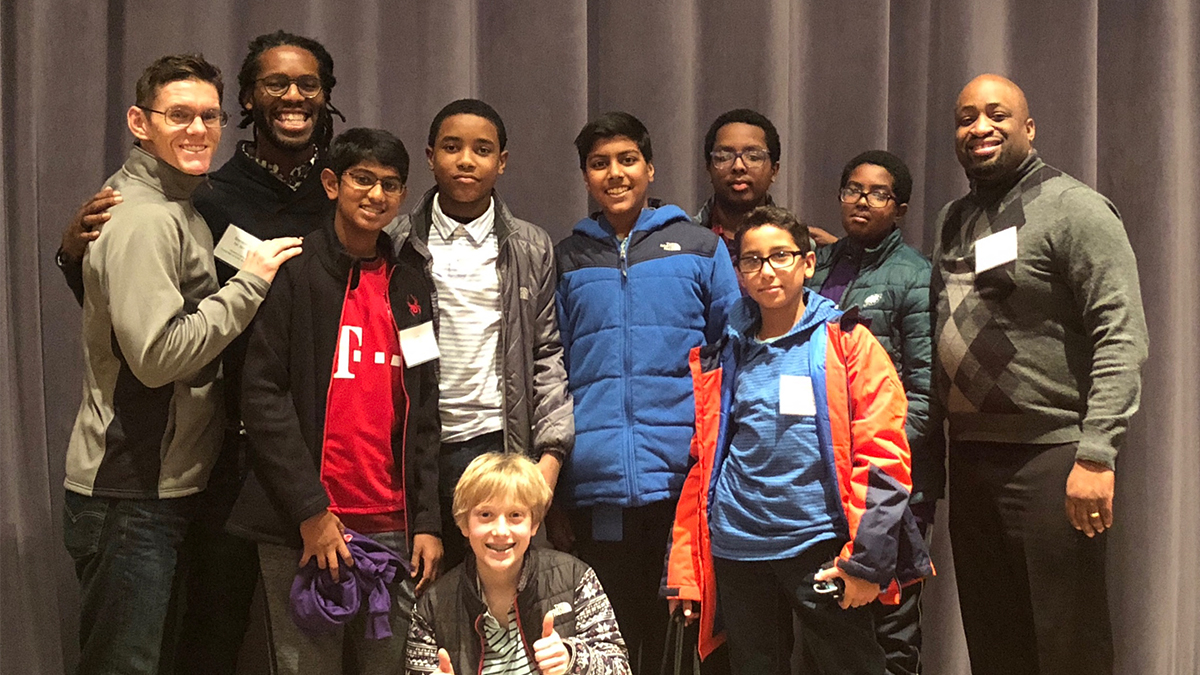 Five Middle Schoolers, along with Middle School math teacher Ryan Meyer and Director of Diversity and Inclusion Brendon Jobs, recently attended the 2018 Young Men of Color Symposium and (Re)defining Power Conference on Nov. 10, at Trevor Day School in New York City. This year's conference theme was "Unlearning Dominance to Learn Accountability to Experience Freedom." They reflect on their experience and lessons learned in this blog post.

Director of Diversity and Inclusion Brendon Jobs:
The Young Men of Color Symposium is a leadership conference for young self-identified men of color in grades 6-12 in the New York City area and beyond. The goal of the event is to empower students to affect positive change in their lives and their communities, using newly acquired language and knowledge. (Re)defining Power Conference is a space for identity exploration and learning best practices as allies for young self-identified white men, also in grades 6-12 in the New York City area. The day featured activities and opportunities for participants to learn skills geared towards building more inclusive schools.

David Stovall, keynote speaker for this year’s conference, really got me thinking about the idea of "fugitive spaces." He talked about approaching the work of inclusion in a space that honors the fact that human beings work best when in community with others. Fugitive spaces are social locations that demand healing and connections with other people who find themselves navigating the positionally of "outsiders" in community. He implored us to ask: "What do we do in the lives of our young folks to affirm who they are?" This conference offered our students the space to garner just some of the affirmation Dr. Stovall got us thinking about.

The boys began to (and in some cases, continue to) investigate their own identities and social interactions in ways that empower them to be vulnerable enough to think about how to disrupt the communities where they practice leadership. Part of this process is finding ways that bring people together across lines of difference. Their post-conference reflections, which are below, are evidence of this reframing in their thinking as a group.

Arsh Aggarwal:
I went to the symposium because I knew that I would learn new things and I also had questions about different perspectives about different races, which were all answered. At the conference, I did many activities regarding kids of color today, and also had a discussion with fellow Asians in an affinity group. These events helped me gain knowledge about problems today and how to try to solve them.

Before I went to the conference, I thought that no one could understand my problems because I am the only Indian in my grade, but I realized that many others felt the same way, and that really helped me. At Haverford, my problems are easier to push through, because I know I'm not alone!

Samuel Jiru:
I decided to go because I wanted to know how to defend my race. At the conference, we talked about instances where things bothered us. It was a place to share my experiences and hear about what others had gone through. I now know not to be afraid to talk about my race or my experiences with other people.

Love McCune, Jr.:
By going to this conference, I hoped to learn whether others were struggling socially with their race. I realized after going through the activities at the conference that there were many people like me struggling from social injustices happening in our community. I learned that there are many other young African-American males with the same problems as me. But I also learned that I'm in the global majority, not the minority.

Roch Parayre:
I decided to go to the conference because I have always enjoyed intense discussions that get me thinking. At the conference, I learned about how to be a better ally for people of color, and how certain people are forced to fit certain stereotypes. I learned about all different types of people from all around the world that might have different backgrounds. I learned that no matter what, everyone is equal. I also learned that race isn't only biological, which is important. Race is a social construct based on skin color.

The thing that I learned that stayed with me was that people would rather hear "I am here for you" than "I understand what you are going through." I also learned we must defy the stereotypes and push for everyone to be themselves. What I learned will help me at Haverford because I can help people that might be going through something difficult without offending them. I will apply it to anyone I know. If they need help, I am prepared to help them, in the best way possible.

Arnav Sardesai:
I went to the conference as a boy of color trying to understand what other people's opinions were on the topic about what it is like being a teenage boy of color in America.

We learned about how different people react to different things. In the morning we got split up in to groups based on our race to talk about names and social injustice. I learned that all types of young boys have different experiences. But with that being said, kids in all the groups go through similar experiences. I also know that if I am ever in trouble, I have people that I can talk to. 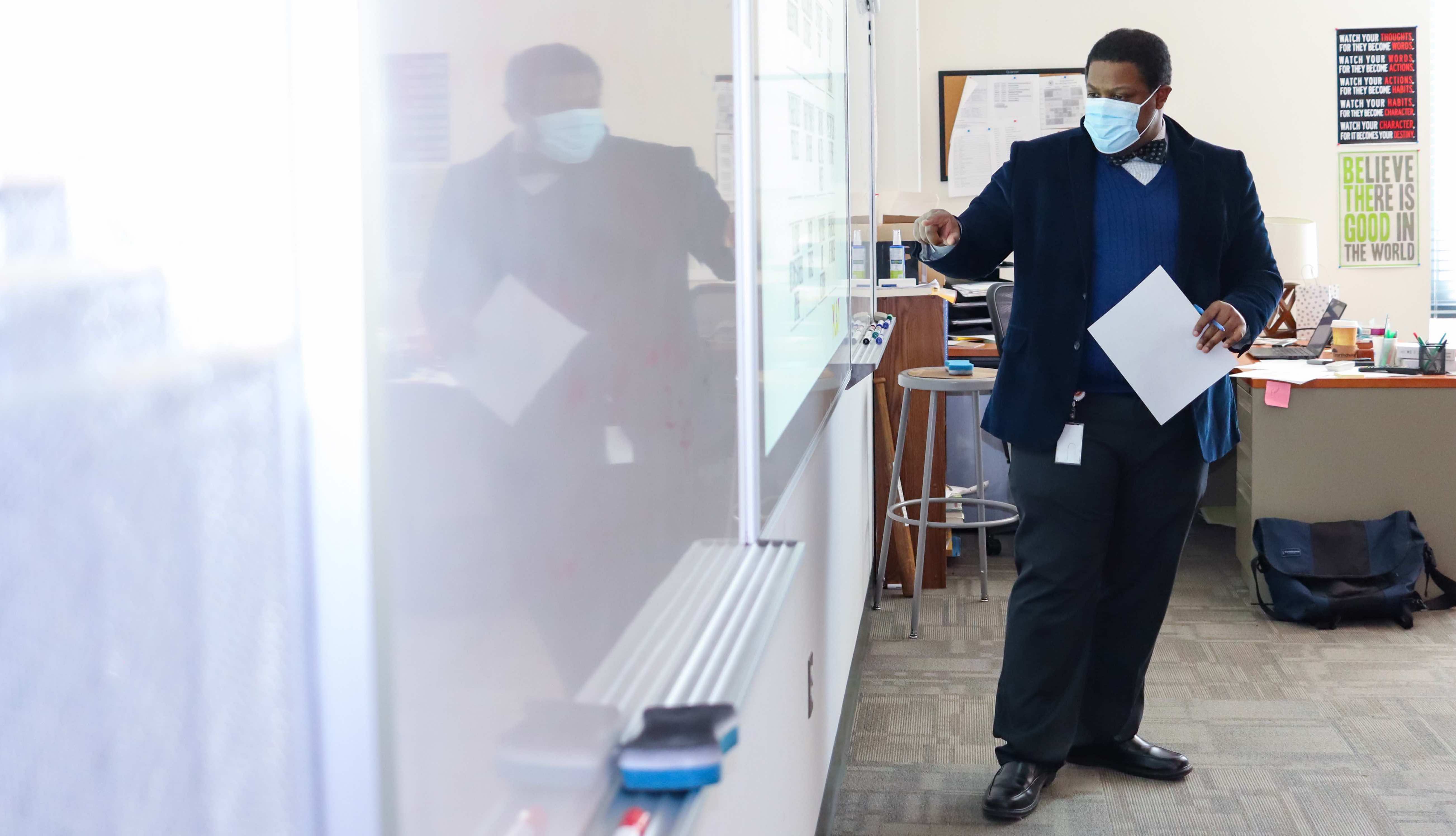