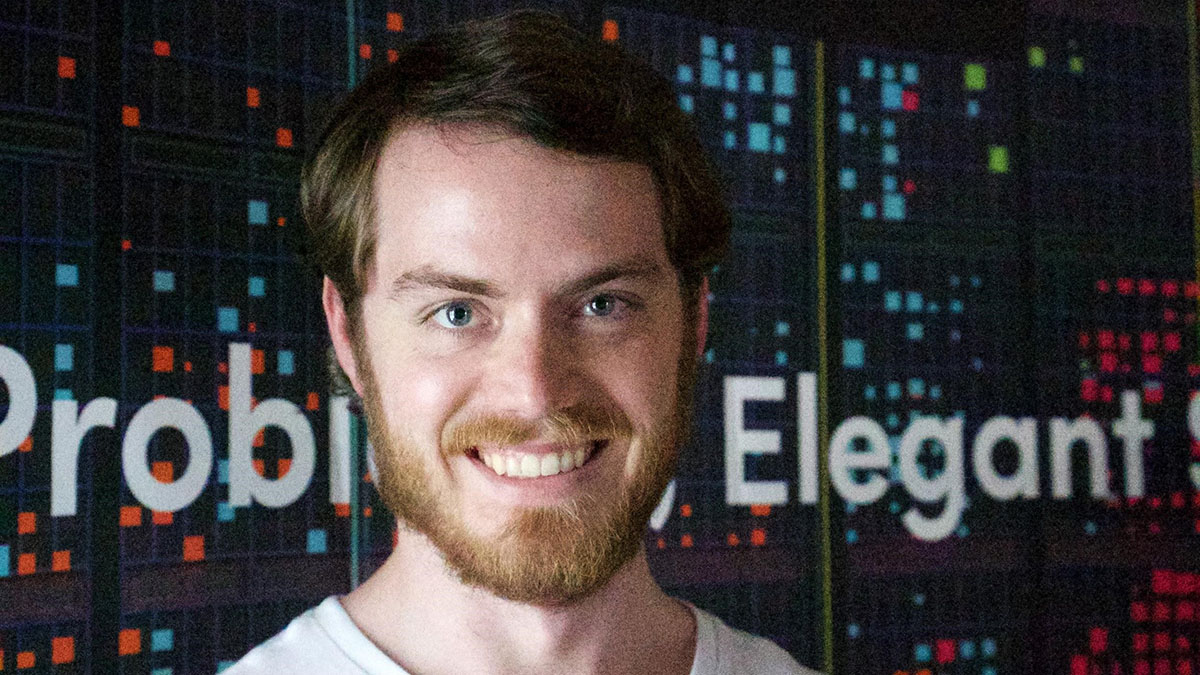 In Fords in Four, we ask an alumnus four questions; he shares insights and stories. In this blog post, Josh Collins '13, Director of Business Development at LeafLabs LLC, reflects on lessons learned from his favorite teachers at Haverford, as well as from starting his own company at the age of 21. He also shares advice for fellow young alums and current students.

Can you recount a memorable Haverford faculty member? What did you learn from them?

I was incredibly lucky to have some amazing teachers at Haverford. I feel like Zack Murtha, Jamison Maley, Rebecca Smedley, Sara Adkins, Tom Trocano, and Bill Ehrhart had the biggest impact on me academically. I also had two great coaches in Brian Skelley and Andrew Poolman, who shaped my athletic career. I had Mr. Murtha, Mr. Maley, and Ms. Adkins each for three years, and so I felt like I got to develop great ongoing academic relationships with each of them. They were all incredibly dedicated to their teaching and their students, and it felt like we were friends at the end of my time at Haverford. Mr. Maley was always my favorite teacher, and he possessed an uncanny ability to connect with students despite, or maybe because of, his eclectic personality. He really took me under his wing, and I always felt like we had very similar personalities in a lot of ways. I actually did an independent study on dark matter and dark energy with him my senior year, which was an amazing opportunity to do some self-driven work. Ms. Smedley was one of the most contagiously positive people I’ve ever met in my life, and I was always amazed by the way she made everyone she taught feel valued and special. Mr. Trocano’s honors chemistry class was notorious, but it served me well in college both in subject matter and the way he taught us to prepare and work through challenging problems. I still tell the story of Mr. Trocano asking a True/False question, and when a student answered incorrectly, he’d joyfully exclaim “Close!” Dr. Ehrhart was incredibly open with me as one of his advisees, and I really admired how he would always speak his mind. He always seemed to stay so true to himself and encouraged us to do the same. Coaches Skelly and Poolman both helped me develop athletically alongside my academics, and taught me a great amount about discipline, intentional practice, and hard work outside the classroom. I always appreciated that both would join us in our practices, as it really showed how dedicated they were to our improvement..

What did you learn at Haverford that you carry with you?

The lessons around the “man in the arena” Roosevelt speech by the School’s entrance has always resonated with me. Being the “doer” as opposed to the “critic” just makes sense to me; it’s easy to poke holes in others’ work or opinions, but it’s hard to be a creator or to actually try and help people or make the world better. I remember also the messages of many student presenters and guest speakers who emphasized that failing is okay. I think that too often in our society, people view failing as a character defect. But I’ve learned that going after your goals, even when they are hard or when critics tell you they’re impossible, is an amazingly undervalued skill. Being okay with yourself and eager to try again if you fail is hard, but it is a crucial mindset to have in both personal and professional endeavors. In any part of life, you need to strive for things that you care about; doing this is how you ultimately succeed. I feel lucky that Haverford started instilling this lesson in me at a young age because I think it’s a lesson that not everyone learns at all, let alone in high school.

Being okay with yourself and eager to try again if you fail is hard, but it is a crucial mindset to have in both personal and professional endeavors. In any part of life, you need to strive for things that you care about; doing this is how you ultimately succeed. I feel lucky that Haverford started instilling this lesson in me at a young age because I think it’s a lesson that not everyone learns at all, let alone in high school.

Can you trace your career path so far, including how you started your own company, Slope, at the age of 21?

I’d first and foremost like to actively and aggressively acknowledge my own incredible privilege in even being able to go down this path. Having a loving family able to send me to a school as great as Haverford, getting to attend Princeton, and getting to work with all the amazing mentors I met there and in my early career all greatly contributed to my career so far – this is all also compounded by my inherent privilege as a straight, white, cis, well-off male in our society.

I came out of Haverford inspired by Mr. Maley to pursue astrophysics. Early on, I switched to engineering, but midway through my sophomore year, I realized that the classes I was taking weren’t my forte, and I was struggling both to succeed and to enjoy my time in college. This was an example of another lesson I learned tangential to the lesson that failure is okay; changing paths for a good reason is also okay! I switched my major to philosophy, a subject which I really enjoyed, and parlayed my engineering work into Computer Science and Entrepreneurship minors.

In my final year, I took a class called “Entrepreneurial Leadership.” For the final project, we had to do a full pitch of a company. I had been working on Slope, a financial technology company, on the side for a while, so I got a group together and pitched that idea. One of the guest speakers and judges for the pitch was an angel investor named Shana Fisher. She really liked my idea, and when I reached out to her later, she offered to meet me and discuss investing in the idea. I was totally caught off-guard, but obviously I jumped at such an amazing opportunity. I decided to forego my “safe” job offer, and work on Slope full time with her backing.

I worked on Slope for about 1.5 years, and I learned a ton. It really feels different than an academic setting when you have to make things work in the real world. There was so much that I didn’t know, and building Slope was definitely a trial by fire. I did some things well; I managed multiple contractors to bootstrap the financial technology platform, and got partner meetings with a few venture capitalists, but I also made a lot of mistakes. At the end of the day, I think I failed to build a solid full-time team around me, I was young and too inexperienced in the financial markets, and the timing of the 2017 crypto bubble was just a bit off. I still think Slope was a good idea, and despite it not turning out how I wanted, I would do it again in a heartbeat.

I then spent a short year stint in marketing at Embark, where I learned a good bit about marketing, and also learned a lot about team building. I had an amazing boss who remains a great mentor to me today. I contributed to us raising a $10m series A round; that process was great to be a part of. After that though, there was some restructuring, and I was let go. So I got back up, and kept going! I interviewed around, and finally found kindred spirits at LeafLabs, a small engineering consulting firm. They were looking for someone to take over some of the business side leadership. They told me that my background as a founder was attractive, and so I was hired.

I really enjoy the flexibility and varied nature of the work. Since we’re a 20-person company with 15 engineers I find myself wearing many hats. Because of the nature of my role, my work is highly self-driven and unstructured. This is good and bad sometimes! It requires discipline to get meaningful, valuable work done without anyone telling me what to do. On the flip side, I get to have a lot of daily input into the priorities of the company. It’s this self-driven type of work that excites me most about entrepreneurship: the chance to build something and create value in the world. I also want to feel like the work I do on a daily basis matters, and I think this is most true in small, startup-like environments.

You are all privileged to go or have gone to Haverford. Don’t waste the opportunity. Work hard academically, athletically, and socially. Acknowledge the gift you’ve been given, and then strive to give back.

What advice do you have for other young alums or current students on how to make the most of their Haverford education?

You are all privileged to go or have gone to Haverford. Don’t waste the opportunity. Work hard academically, athletically, and socially. Acknowledge the gift you’ve been given, and then strive to give back. Giving back doesn’t have to mean going into social work or giving tons of money. It can mean joining a business that operates in an ethical way, or helping to build something that will change the world – anything you can do to help people without expecting anything in return.

Absorb as much information as you possibly can. Get exposure to things and opportunities outside of school. Develop and cultivate your intellectual curiosity. Find the things that interest you, and dive deeply into them. Haverford teachers are unique in that they’re willing to go as deep on a subject with you as you would like. Infinite opportunities exist at Haverford, but you have to seek them out. You don’t need anyone’s permission to chase your dream, or to make your idea a reality. Be hungry to learn, build things, and connect with others. And when opportunity arises, be ready to execute. You can make a career out of anything if you are dedicated to it.

After graduating, stay connected to the alumni network. Few high schools have alumni as dedicated to their school as Fords alumni. Take advantage of this. Networking with this incredible group, not just for yourself but in order to help others, is something I strive to do better in the future. In that vein, my email is jmcoll13@gmail.com. Please feel free to reach out to me if you have any questions or just want to talk.