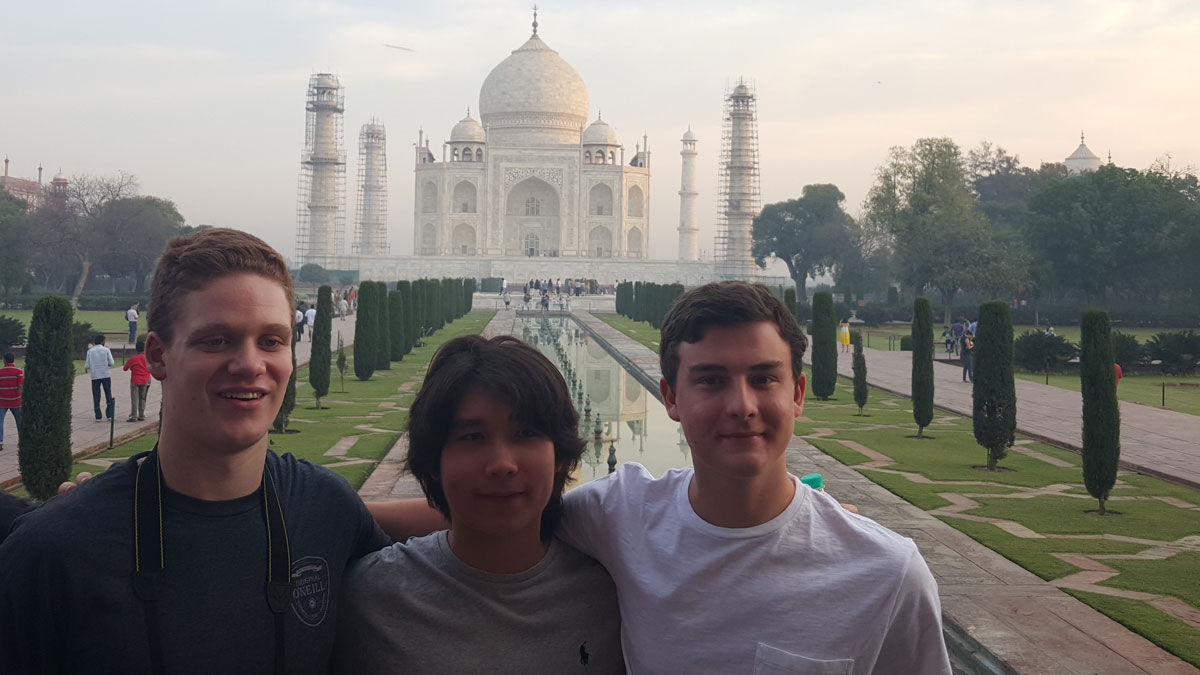 India is a country of extremes. The rich are richer, the poor are poorer, nature is strikingly beautiful, and the cities are polluted beyond repair. We saw beggars panhandling next to newly minted Ferraris and factory trucks spewing exhaust to the pristine backdrop of Himalayan foothills. And yet, somehow, the confusing jumble of maximums and minimums all seemed to make sense.

All the ostensible divisions, all the contrasts that left us feeling we were on a different planet rather than on a different continent—all of it was held together by some powerful, invisible thread, some cultural inheritance that no American can claim as his own or ever fully understand.

It was enough to simply let our guard down and go with the flow, to immerse ourselves in the smiles of temporary companions and marvel at their genuine friendliness and respect. By the end of the trip, we realized that the Indian soul isn't defined by its contradictions, but rather indifferent to them; its only goal is its own evolution, and it could care less about the height of transitory skyscrapers or the vastness of transitory slums.

The three of us—Alex, Harrison, and I— will never forget the faces of the Indian boys who woke up at 3 am on the morning of our flight home just to say goodbye to us. I don't know their names, I'm not even sure what they said, but I have no doubt we'll always retain the palpable human connection we felt in their presence.

When Mr. Poolman announced to the senior class back in November that he was looking for a few students to take with him to India over spring break, I knew I had to go. The farthest I had ever gone was to Europe, and from what I had heard from others who have previously traveled there, India is a place unlike anywhere else in the world. That was exactly what I was looking for.

Moreover, I saw this project less as a trip and more of an experience. What excited me most was to have the chance to see a part of India that has not been influenced heavily by tourism, and the fact that I would be conversing with people my age, but who have a completely different perspective of the world than I do.

Interacting with people your age from another part of the world is a humbling experience. Our opinion of the world comes from where we live, and my favorite moments have been those where I realize the differences between us. That is not to say that differences are a bad thing.

Difference lets us see a situation from another perspective, which is something that is sometimes hard to do at Haverford. It is easy to view the world from the safety of your bubble looking outward, but I strongly encourage you to take a chance.

I think visiting India is so powerful because of how distinct it is from the East coast. By going on this exchange program, you are not only forming a bond between yourself and the students at Welham, but a bond between these two schools. You have the opportunity to help yourself and Haverford gain a greater view of global issues, as well as see what is different and what is the same between us. I think culture can be learned through a textbook, but to truly understand a person, you need to meet face to face.

We went for ten days to India over spring break. We traveled to Jaipur, Agra and Delhi. Although we saw many amazing historic sites in these cities, like the Taj Mahal, I'm going to talk about our time at the school we went to in Dehradun. We went to Welham Boys School, a prestigious boarding school in the foothills of the Himalayas. At this school we stayed in the dorms with students. We made many great friends with students at Welham. Our first two days at the school we didn't actually spend in school. The first day we traveled with three Welham students to Mussoorie, a town further up in the foothills of the Himalayas. In this city we got a taste of what life was like in northern India. The next day we traveled to a Tibetan Buddhist monk monastery, and then visited another city called Rishikesh. Rishikesh has to be my favorite city from the whole trip. In Rishikesh, we observed a very traditional ceremony of Hindu monks worshiping the Ganga river at sunset. Finally in our third day at Welham Boys School we attended classes. Classes were very different since the kids aren't allowed to have technology. However they still maintained a very high level of academics. This academic curriculum consists of three paths: Math and Science, Commerce, and the Arts. The students are expected to choose between these three paths in high school. Math and science is the most difficult and considered the most valuable in India, commerce the next most valuable, and the arts are considered the least valuable. Unfortunately we only had these three days in Welham however we all had a great time and made great friends.