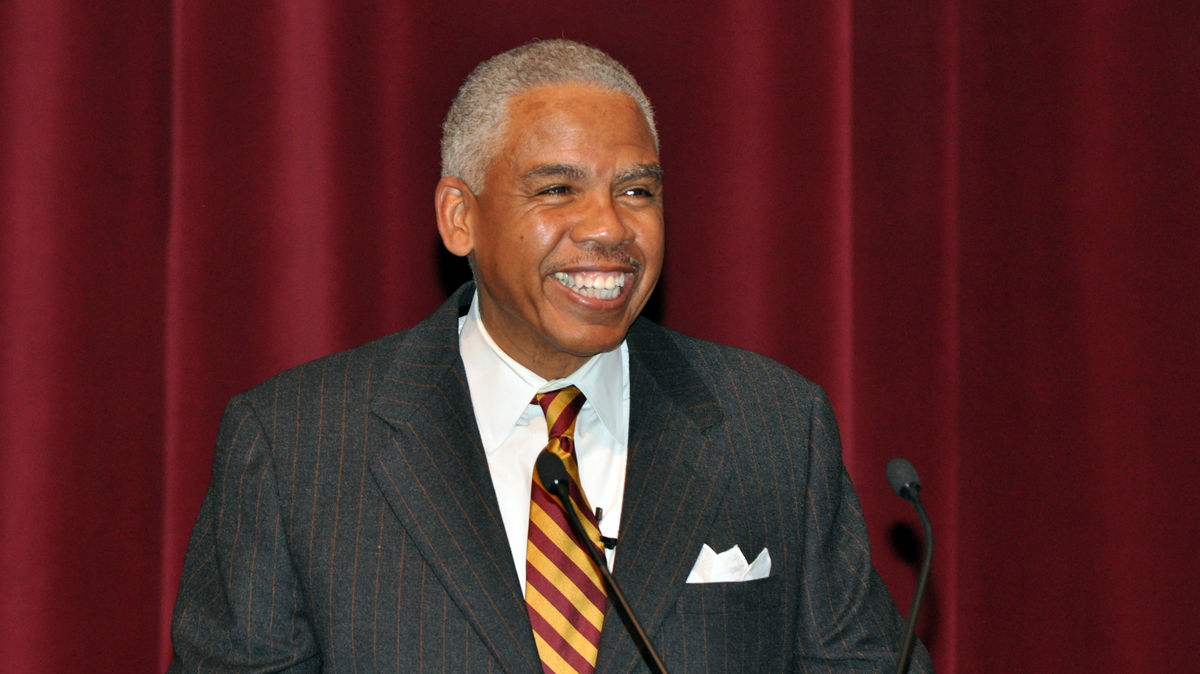 Holland (pictured above) delivered the following tribute to George Smith to the Upper School on Feb. 21, 2013:

I want to express my deepest gratitude to all of you who have made this day possible. Like saying grace before a meal, let me send special thanks to Joe Cox, George Wood, Henry Fairfax, Chris Avery, Tim Stay, and former Board Chairs Ted Peters and Bill Torkelson for giving me the opportunity to share my thoughts about George Smith, a son of Ardmore. And let me welcome many of Porgie's friends and family to Haverford today, particularly his sister Dorothy.

Today, we the Fords Nation, celebrate proudly the life of George Smith, the Jackie Robinson of The Haverford School – the first African American student to graduate from Haverford. We celebrate George and Don McBride Sr., who jointly demonstrated the courage to change life as we know it.

But preliminarily, let's ask, why is it important to recognize George? As Americans, it is part of our nature to recognize "firsts." For example, the first President is George Washington; the first men in flight were the Wright Brothers; and the person recognized as inventing the automobile is Henry Ford. Here at Haverford, we have recognized several firsts—such as, Haverford's first astronaut, Pete Conrad (who, by the way, literally walked on the Moon); Haverford's first Governor, John Hickenlooper of Colorado, and even Haverford's first professional football player, Mike Mayock. In a civil rights sense, we recognize the first black President, the first black Mayor of Philadelphia—Wilson Goode—and of course baseball's first black player, Jackie Robinson.

Moreover, let me say that the civil rights struggle here in the United States is at least as significant as any struggle of liberation around he world—such as Mahatma Gandhi's struggle in India, the ethnic cleansing in the Balkans, the conflict between the Turks, Armenians, and Azeri's, and Nelson Mandela's struggle against apartheid in South Africa.

Let me tell you about George, or "Porgie," as we called him. I first met Porgie in Sunday School at Bethel AME Church in Ardmore. For many of us who grew up in Ardmore, it is where we spent most Sunday mornings. As long as I can remember, Miss Daisy Smith—Porgie's mother—used to bring Dottie, Porgie, and Sneezy to Sunday School. And while Miss Daisy's official title was Superintendent of our Sunday School, our collective, most vivid memory of Miss Daisy was that of her with a wooden spoon in hand as she reigned over us: we would always submit to her will. To many of us, Miss Daisy was more the Sunday School Warden or Enforcer than Superintendent. Yet, she treated all of us as though we were her own kids—Dottie, Porgie, and Sneezy. I do recall that we would run from her, between the chairs and tables in the Church Sunday School. I think that is where Porgie got his start as an athlete.

Porgie was one of Ardmore's finest athletes. He played football, basketball, and track. He captained a couple of teams. He ran in the Penn Relays. At Ardmore Avenue Elementary School, he was a Champion at the Bryn Mawr Olympics. And, during summer nights—those hot and humid summer nights, Porgie would be at Ardmore Playground playing basketball or football, honing his skills to be yet another outstanding athlete from Ardmore—like Chris Morgan here at Haverford School or Bernard Peirce of the Super Bowl Champion Baltimore Ravens.

In ninth grade, in addition to being a Class officer, Porgie was a sure bet to receive the Best Athlete award at the ninth grade graduation. He was by far the best athlete at AJHS: Mike Holland was second. But that night, Earl Henderson, from Narberth, received the award from Principal Harry Donald. I can recall vividly how Porgie's head fell into [sunk into] his chest in disappointment.

It was Porgie's plan to become the best athlete at AJHS and then go onto LMHS. That was not God's plan. You see, that summer, Porgie went from relative obscurity to ushering in a movement. He went from the "Man to the Movement."

In September 1964, Porgie was the first African American student admitted to The Haverford School. A son of a chef and domestic went to school side-by-side with the sons of the CEOs and investment bankers. While it seems so common now to have African Americans in the Main Line's prestigious private schools, it had to start with somebody, and it started with Porgie. Donnie McBride—Haverford's basketball coach—and others convinced the School that George Smith should be the first. And you know what: Porgie did it with style and grace—much like Jesse Owens at the 1936 Olympics, like Jim Brown and the Cleveland Browns, and Arthur Ashe on center court at Wimbledon in 1975. He made Donnie McBride's dream a reality—just as Jackie Robinson did with Branch Ricky.

In September 1964, Porgie was the first African American student admitted to The Haverford School. A son of a chef and domestic went to school side-by-side with the sons of the CEOs and investment bankers. While it seems so common now to have African Americans in the Main Line's prestigious private schools, it had to start with somebody, and it started with Porgie.

But, I can only imagine how difficult that was for him. In 1963-64, when Porgie was admitted to Haverford, race and civil rights were the number one public policy issues in America, just like the fiscal cliff and immigration are today. Tensions ran high, even here on the Main Line. Porgie was by himself when he started at Haverford—just like many of our race's other firsts, who were required to stand alone and endure on our behalf. In contrast to many of us who were part of the busing experiment in Lower Merion when they closed Ardmore Avenue Elementary School in September 1963, where we at least had a couple of AA classmates, some form of familiar companionship, while Porgie endured it alone. Moreover, as an athlete, I can only imagine the emptiness he felt in the locker rooms. At Lower Merion before games, we would listen to a little Soul Music—like the Temptations, Four Tops, James Brown, or Earth Wind & Fire, you guys today would listen to Lil' Wayne, Two Chains, or Waka Flocka—to lift our spirits and to raise our game to compete at our greatest potential: Porgie didn't have that. He was good at sports, but imagine how excellent he would have been if he did have the support we shared.

We were indeed living the civil rights movement right here in Ardmore in the 1960s. Whatever was happening in Little Rock, Ole Miss, Wimbledon, or El Paso, Texas, was happening right here in Ardmore (indeed with Bethel as ground zero). Moreover, Porgie's experience showed how sports could bring social change. Porgie was part of that movement in sports that showed how America was changing. And just like Arthur Ashe, Porgie did it with grace and style.

Moreover, Porgie's experience showed how sports could bring social change. Porgie was part of that movement in sports that showed how America was changing. And just like Arthur Ashe, Porgie did it with grace and style. Talk to any of his schoolmates—some of whom are here today, like former Board Chairman Bill Thorkelson —and they would say as much.

Indeed, Porgie started a movement because after him, there were other AA students admitted to the Main Line private schools. And, the experiment worked. Russell Allen went to Haverford, Janine Stewart and Lydia Allen to Agnes Irwin, just to name a few. And, I am proud to say that they are all children of my church, Bethel. Furthermore, the success of the story is alive and well today. Most recently, Gerald Henderson and Wayne Ellington of Episcopal Academy were All-American basketball players at Duke and North Carolina, and last June became part of the NBA's new class of millionaires. Indeed, it all started with Porgie. It started right here at Haverford.

Porgie has been in my thoughts for years. Even nowadays, I am tasting loneliness as I move about in corporate America. But, in my own way, I try to keep his dream alive. Although he did it as a youth: because of his example, I believe that I can do it as a man.

As I close, let me say that I am so thankful Coach McBride and others gave George that opportunity. I am proud to say that they showed courage. It took just as much courage for Porgie to leave the comfort of Lower Merion and come to Haverford as it did for them to stand up to established society and say, "it's time for a change." You could hear Porgie say to others, in the words of Langston Hughes:

"Let me tell you, life for me ain't been no crystal stairs. It's had tacks in it, and splinters, and boards torn up, and no carpet on the floor but bare, and all the time I have been a climbing on, and reaching landings, and turning corners, and sometimes going into the dark." [and then list his trials and tribulations if you do].

But Porgie will tell you, "but don't you turn your back, don't you set down on the steps, because you find it kinder harder; and don't you fall now, but keep on climbing." I am thankful to Bethel Ardmore and its rich heritage to allow Porgie and the rest of us to grow. Most importantly though, I am glad that God had a different Plan for Porgie. George Smith—he was a man, and a movement.