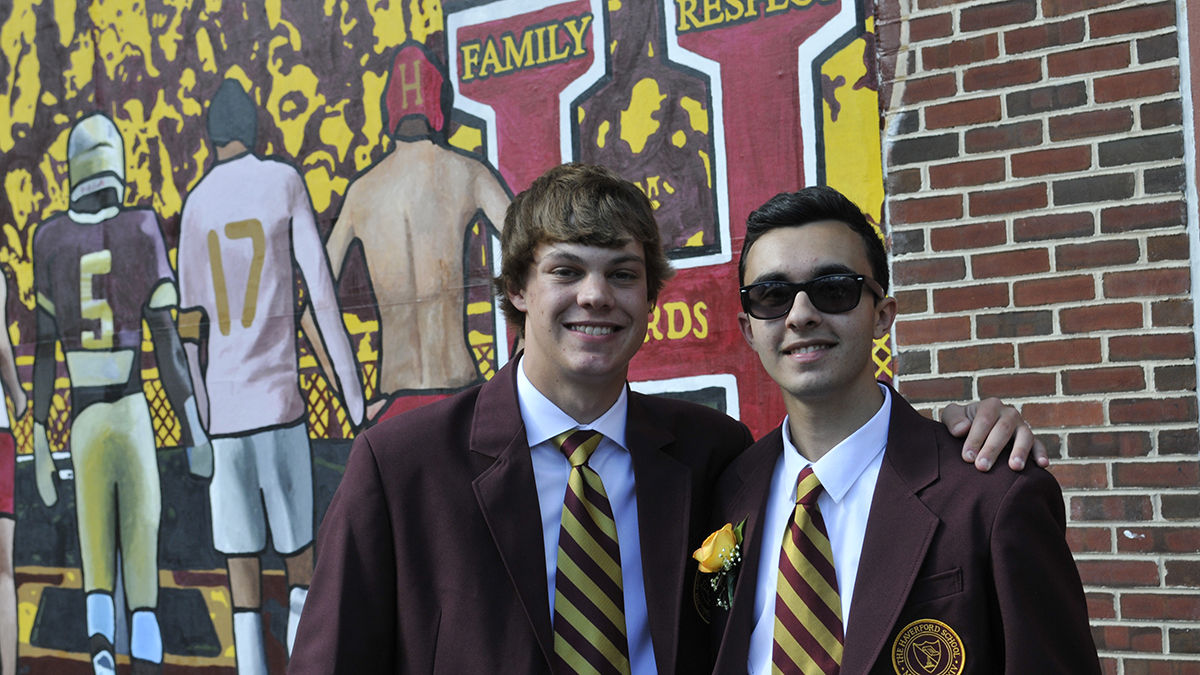 Art has been a big part of our lives here at Haverford, and this mural project was the perfect way to end our senior year. We had been planning this mural since early February, and were able to get started right away. We went through several drafts to come up with a design that would not only look visually pleasing, but also relate to the core values of Haverford.

After assembling the necessary supplies, we began cutting eight 5x5 foot squares and four 5x1 rectangles of parachute cloth. This step took a lot of planning because a certain amount of extra cloth had to be left on each square to help us in case it did not line up well when we finished. We then primed the cloth with polycrylic sealant and gesso. It took us two days to cut and prime all of the pieces.

After they were all primed, we began tracing out the mural with a projector. This step demanded some technical skill because each image had to be cropped from the original image and then projected exactly over the piece of parachute cloth on the wall. Once all of the pieces had been traced, we laid them all on the ground to check their alignment. We then had to decide on three or four major colors, and mix them all, before starting to paint the mural.

We practiced our communication and cooperation skills by evaluating ourselves before we started painting and deciding who should paint which parts based on their personal strengths. We also needed to make sure that certain parts of the mural that spanned across multiple panels were painted with the same style to stay consistent. We were able to objectively acknowledge who would be the best at painting certain parts without fighting. It required a great deal of respect and humility for us to admit that some parts might be too challenging for us and agree that someone else should do it in order to achieve the best final result. 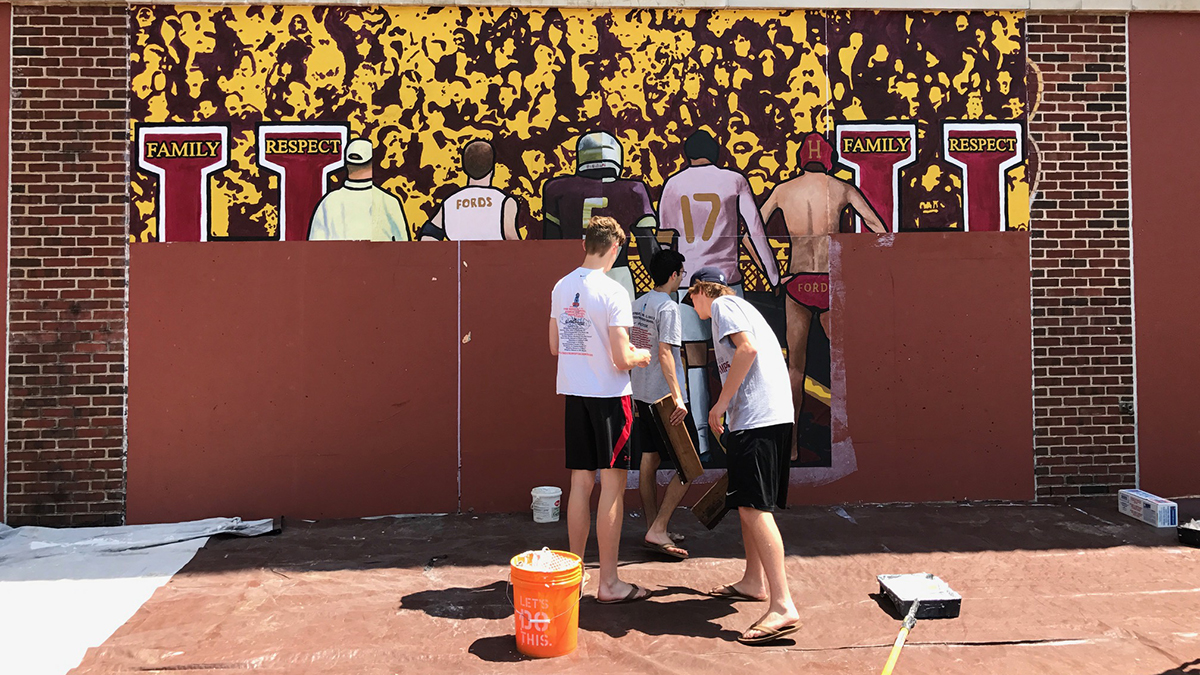 The actual painting of the mural took a little over a week to complete. We had to work fairly long days, usually more than six hours a day, but we worked extremely efficiently together, finishing a 5 ft.x5 ft. panel a day on average.

Once we had our main colors we began painting the mural. The actual painting of the mural took a little over a week to complete. We had to work fairly long days, usually more than six hours a day, in Mr. Fox's studio, while Mr. Fox and Ms. Blatt were teaching classes. We were responsible for cleaning up after ourselves, taking care of our paint, brushes, and other supplies while not getting in the way of the teachers. But we worked extremely efficiently together, finishing a 5 ft.x5 ft. panel a day on average.

We then laid out the mural again to check the alignment and make note of where we needed to fix the transitions from panel to panel. We then met with Mr. Wisniewski, director of facilities, to ask for help from his maintenance crew to help us mount the mural. He set us up with a lift and some of the maintenance workers helped us paste the mural on the wall. This process involved coating the backs of the mural pieces with a substance called novagel and systematically placing them on the wall so that everything lined up perfectly. With the help of Mr. Wisniewski's lift and crew, we were able to hang all of the pieces in one day. 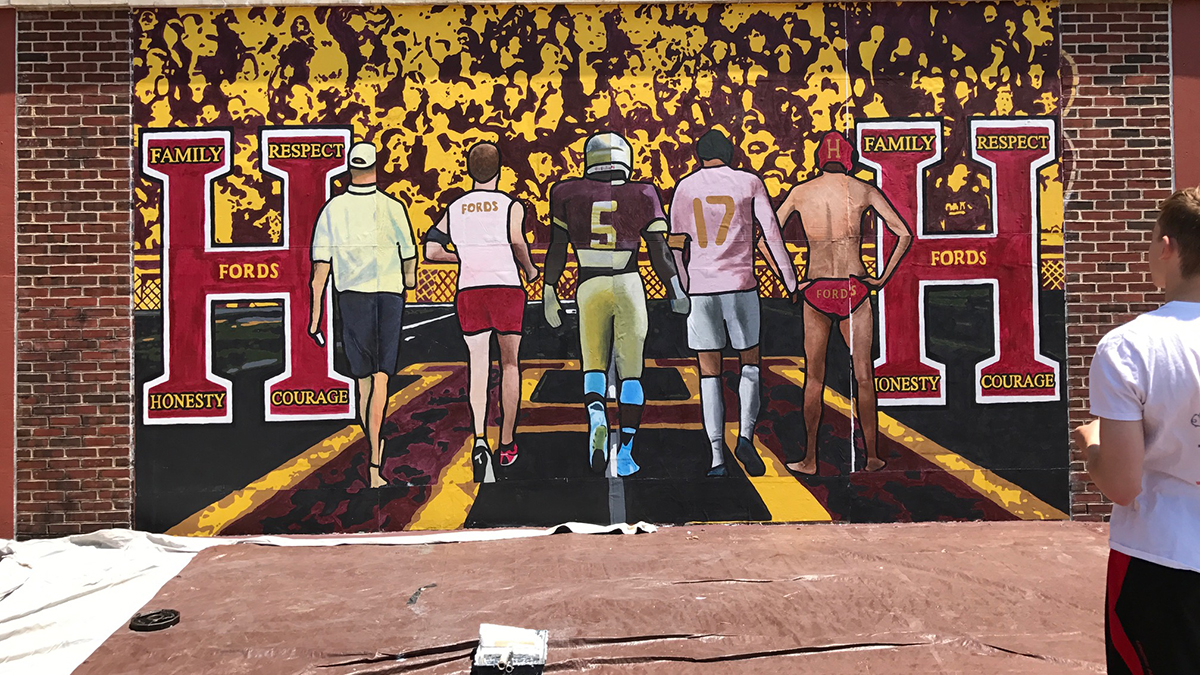 We feel that by creating a beautiful and well painted mural, we are giving something back for everyone in the community to appreciate and enjoy.

The final step of the process was touching up the mural, and any glaring errors with the painting. The majority of touch-ups we did involved the figures and the skin tone, as it is hard to get a constant tone when the body is split onto four different panels. The mural was a lot of work, but we were able to finish painting and posting it on the wall in the allotted time. We planned out most of the process but not everything went smoothly. We encountered many small problems, which forced us to put our heads together and find a solution.

Ms. Blatt and Mr. Fox were major contributors to the success of our mural project. Mr. Fox gave us general directions and was always there to answer any questions about the process. Ms. Blatt gave us artistic critiques as we worked and even helped with the painting herself at times. Mounting the mural on the wall simply would have been impossible without the help of Mr. Wisniewski and his crew.

Overall, the project was a major success. The design has been loved and accepted by many members of the school community. We feel that by creating a beautiful and well-painted mural, we are giving something back for everyone in the community to appreciate and enjoy.