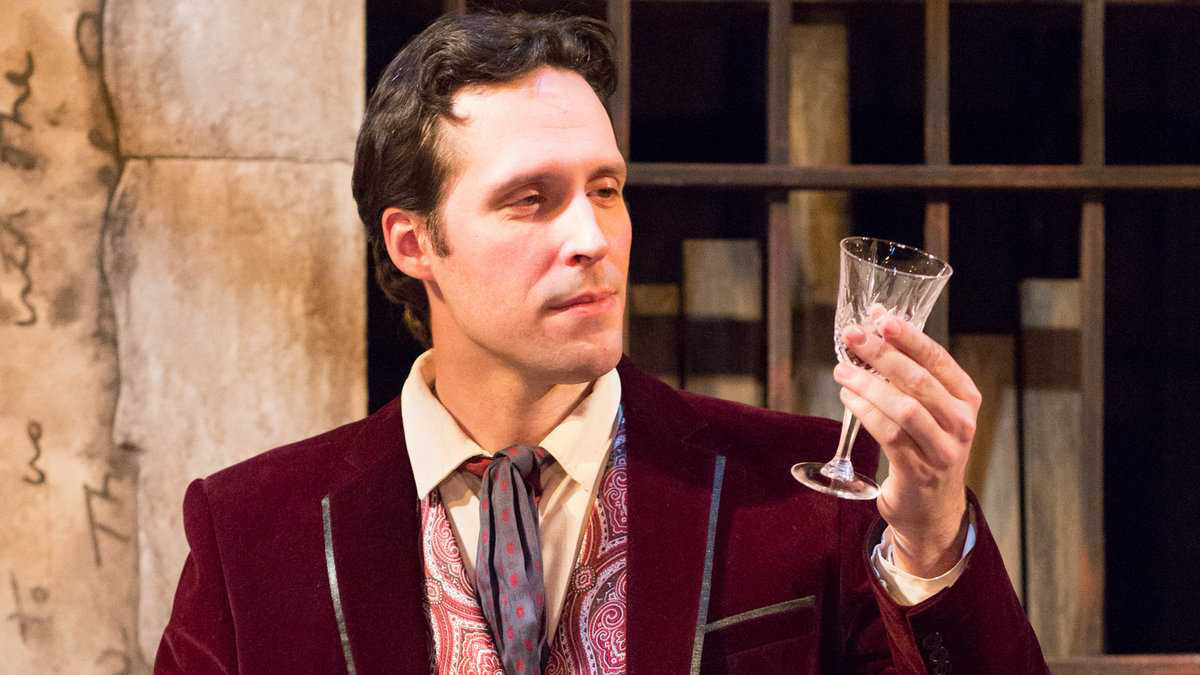 For the past 10 years, I've taught the Sixth Form Page & Stage Seminar, in which students study seven or eight plays and then see them live on Philadelphia-area stages. After the show, we usually have the opportunity to speak to a production's creative team to ask questions and make comments. We read some professional play reviews in The New York Times, The Inquirer, and The Broad Street Review, and then students try their hand at it, putting into language their impressions of the production's relative success. I frequently hear students say, "Writing about art is hard." They're right.

But having an opinion about what a play has to say and how effectively a theater company brings those ideas to life builds crucial critical skills. They might never again write a play review, but when someone asks their opinion about a film or an art exhibit, Page & Stage alums will have something to say.

Our most recent production was The Lantern Theater Company's premiere of Charles McMahon's Oscar Wilde: From the Depths. Following is Alex Sanfilippo's review of the show.

Oscar Wilde's The Importance of Being Earnest ranks among the best comedies ever written. Lantern Theater Company's production on the famous 19th century writer is everything but comedic. Regurgitating Wilde's literary style, however, was never the intention. Rather, playwright Charles McMahon focuses on exploring Wilde at his core, all pomp and circumstance cast aside. What he found, and what the audience learns, is far from concrete, but nevertheless allows a glimpse into the darkness of someone often described for his light.

Widely regarded as one of the most influential writers of Victorian England, Oscar Wilde experienced a meteoric rise that made him the "toast of London." Wilde's swift, dramatic fall from prominence unfortunately casts an unforgiving shadow over the highlights of his illustrious career. McMahon noted: "the suddenness and severity of his reversal is certainly dramatic, but there is a mystery at the core of the story that has always fascinated me." Oscar Wilde: From the Depths endlessly probes at this mystery, tracing circuitously back into Wilde's life prior to his tragic imprisonment.

Oscar Wilde always possessed a talent for writing, beginning with his studies of Ancient Greek at Trinity and Magdalen Colleges. At University, he developed an utmost appreciation for aesthetic and appearance, defying societal norms by decorating his room with floral patterns and revering material like blue china. Wilde's life forever changed with his introduction to Lord Alfred Douglas, or Bosie. The two quickly became enamored with one another and romantically involved, much to the chagrin of Bosie's father, a traditionalist referred to as the Marquess of Queensberry. Heart set on destroying his son's illegal relationship, the Marquess and Wilde traded lawsuits. Wilde lost, landing in prison for two years on the charge of "gross indecency."

McMahon's play begins in prison, an apt location for Wilde's many grand, reflective monologues. McMahon's search for the answer to the aforementioned "mystery" lies rooted in identity, an underlying theme throughout. Wilde's quixotic vision of his own impenetrability raises questions of how fame and success cloud judgement, choices, and identity. In a 21st century world where advertising and celebrities create a romanticized version out of anything and everything, probing further into identity and success resonates with all. Execution, however, faltered in the script. Florid, grandiose language, presumably an attempt to replicate Wilde's preeminence and prestige, only succeeded in drawing out an already lengthy production – the audience left with little time to digest. Further, the script took an overly indirect route to an uncertain conclusion, Oscar's "mystery" left unsolved. The audience leaves wanting something definite, the many shifts from past to present – appealing at first – soon becoming an unnecessary burden to an already beleaguered group of spectators.

Still, moments of theatrical brilliance shine forth, largely thanks to an impressive trio of actors. Leading the group, Marc LeVasseur (Oscar Wilde) tackles the demanding role with poise.

By nature of the script, LeVasseur needs to transition instantly from winding monologues in prison to lighthearted flashbacks. LeVasseur's physicality enables audience members to differentiate between location and mood. A broken, beaten, sprawled LeVasseur becomes Wilde in prison, while a buoyant, upright, and pensive LeVasseur, Wilde in the past. Facial expressions and varying inflection cap off the solid performance. Stoicism and exhaustion permeate LeVasseur's face and voice while collapsed on the set, further contrasting Wilde in the past and his gesticulation and light, compassionate voice. Though the monologues feel monotonous at times, LeVasseur saves the most striking visual for last – standing atop the highest set piece intently gazing into a glass of wine, wine that very well might represent Oscar himself.

One actor cannot shoulder the entirety of a three person production. Support for LeVasseur comes in the form of Jered McLenigan (Bosie/Others) and David Bardeen (Robbie Ross/Others), two experienced actors that brought life when a scene turned dull. Tasked with playing almost thirty roles, Bardeen and McLenigan embody versatility. McLenigan's most defining moment comes as he switches from a prison guard to Wilde's elderly Classics professor. The two characters could not be more distinct: a swaggering prison guard with a loud, hoarse voice monitoring Wilde's cell and a feeble professor with a nasally tone hunched forward on a bench. Both characters interact with Wilde in opposite environments. That both characters are played by the same actor is remarkable, and watching these transformations provides much of the play's intrigue. Underpinning the entire performance, McLenigan brought Wilde's lover Bosie to life with effeminate inflection and the necessary sass and pomposity of an Oscar Wilde lover.

Black box theaters create environments suitable for the many scene changes a show like Oscar Wilde demands. An intimate setting gives the audience a chance to connect with performers and, more importantly, see how they connect with the surrounding space and set. Technically, the show excelled. Lance Kniskern's set, a rectangle of platforms at varying levels backdropped by three prison doors with iron grates found its own version of versatility, serving as a prison, theater, courtroom, and more. The many levels produce a captivating variety of stage pictures: the Warden standing tall over a prone Wilde, a questioning lawyer (Bardeen) pacing rapidly as a stoic Wilde sits high, as if on the stand.

Without Shon Causer's lighting, the show would be impossible to follow. A simple, yet profound lighting scheme helps smooth the twenty-one scene changes – white, cold prison lights turn to a soft amber as Wilde speaks to Bosie. Christopher Colucci's scene music adds little to the show, but transition music and sound cues are consistent and well-executed. With so many characters, elaborate costumes would be impossible. Millie Hiibel finds success by creating plain base layers that McLenigan and Bardeen add on to as they change characters, putting on glasses and removing a scarf or adding a jacket and discarding a hat.

Oscar Wilde: From the Depths searches endlessly for meaning to help decipher the mystery of a 19th century celebrity. It may leave audience members with more questions than answers, but three superb performances make Wilde's mystery one worth exploring.