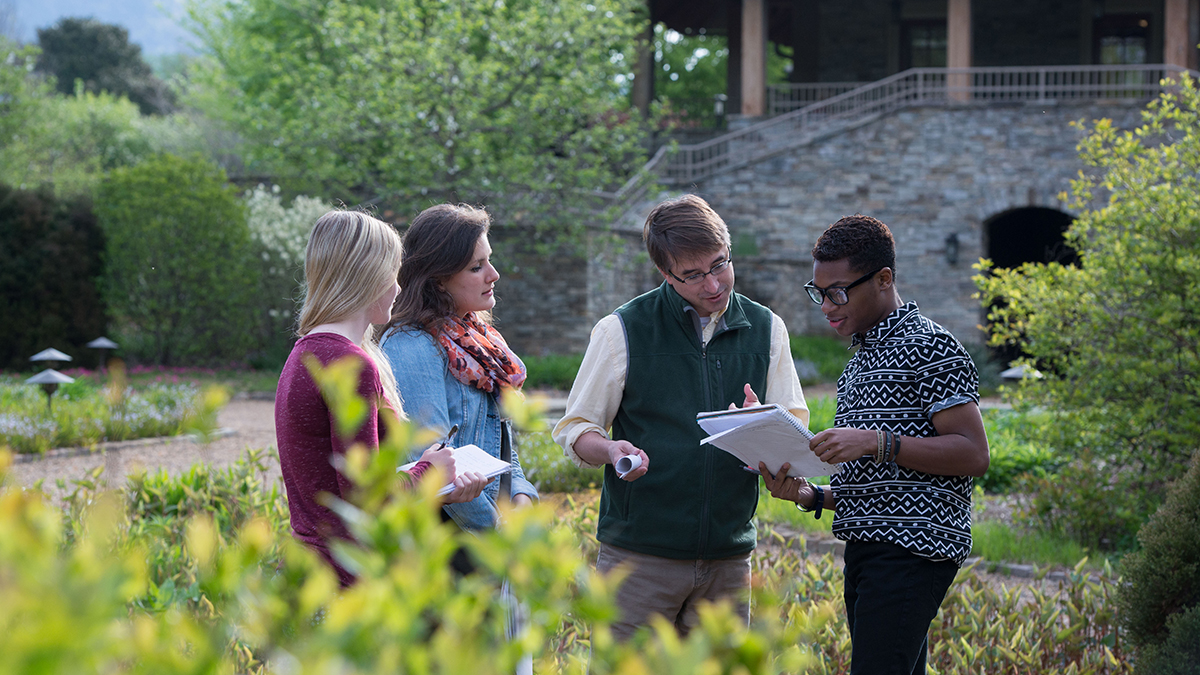 Growing up, Weston Dripps ’88 spent his time exploring Bryn Mawr College’s mineral collection, searching for garnets in road outcrops in Gladwyne, and unearthing fossils from the shale pit at his aunt’s farm in upstate New York. His house is filled with relics of discoveries past and present, from the femur bone of a dinosaur to the tail of a rattlesnake and vials of gems. Dripps’ fascination for rocks and minerals has evolved into educating the next generation of what he refers to as “systems thinkers” at Furman University, including designing the country’s first and only degree program in sustainability science at a liberal arts institution.

“I discovered science early and loved it; I was the kid on the corner with a rock stand instead of lemonade,” says Dripps. “My earliest inspiration was Byron Eskra in sixth grade. Our capstone experience included building a rock and mineral collection. As part of that, I spent time at Bryn Mawr College in the rock room, where different types of light caused the rocks to fluoresce various colors. It was through that project that I realized colleges had incredible collections and resources, and that I could actually study to become a geologist.”

Dripps calls himself an “opportunist” during his years at Haverford, getting involved in everything from student council tree sales to yearbook and spending time on the campus where his father, Craig Dripps ’65, taught math and coached tennis. “I started at Haverford in kindergarten, and the kids I grew up with became my lifelong friends,” says Dripps. “My dad taught at Haverford for a long time, so I grew up with the campus as my playground.”

While doing my thesis work, I lived in a tent for three months up an old abandoned road. I had a camp stove and a tent, and I would drive down to the nearest town to call my parents from a pay phone every week to let them know I was still alive. It was the true Wild West!

After graduating from The Haverford School, Dripps went on to study geology at Amherst College. He volunteered as a docent at the on-campus Beneski Museum of Natural History, which houses the largest dinosaur footprint collection in the world, and worked closely with a sedimentologist. That mentorship developed into spending summers in Montana collecting dinosaur fossils and data, and then into undergrad thesis research mapping the sedimentary layers in the Crazy Mountain Basin. “While doing my thesis work, I lived in a tent for three months up an old abandoned road,” says Dripps. “I had a camp stove and a tent, and I would drive down to the nearest town to call my parents from a pay phone every week to let them know I was still alive. It was the true Wild West!” He recalls lugging gallons of fresh water to his campsite, washing off in the creek, and seeing porcupine, bears, and elk – and having regular run-ins with rattlesnakes.

After that invigorating experience and graduating from Amherst College, Dripps moved to Tucson, Ariz., for a summer internship with the U.S. Geological Survey’s Water Resources Division. “I was trying to be practical,” says Dripps. “I loved geology, but thought I would be more marketable if I pursued a career in water resources.” His summer in Arizona had him running all over the state doing a variety of water-related field projects – while surviving the extreme summer heat. “‘It is a dry heat,’ everyone would tell me, but I would remind them so is an oven,” jokes Dripps. “Working out in the deserts of western Arizona in July is an experience like no other.” 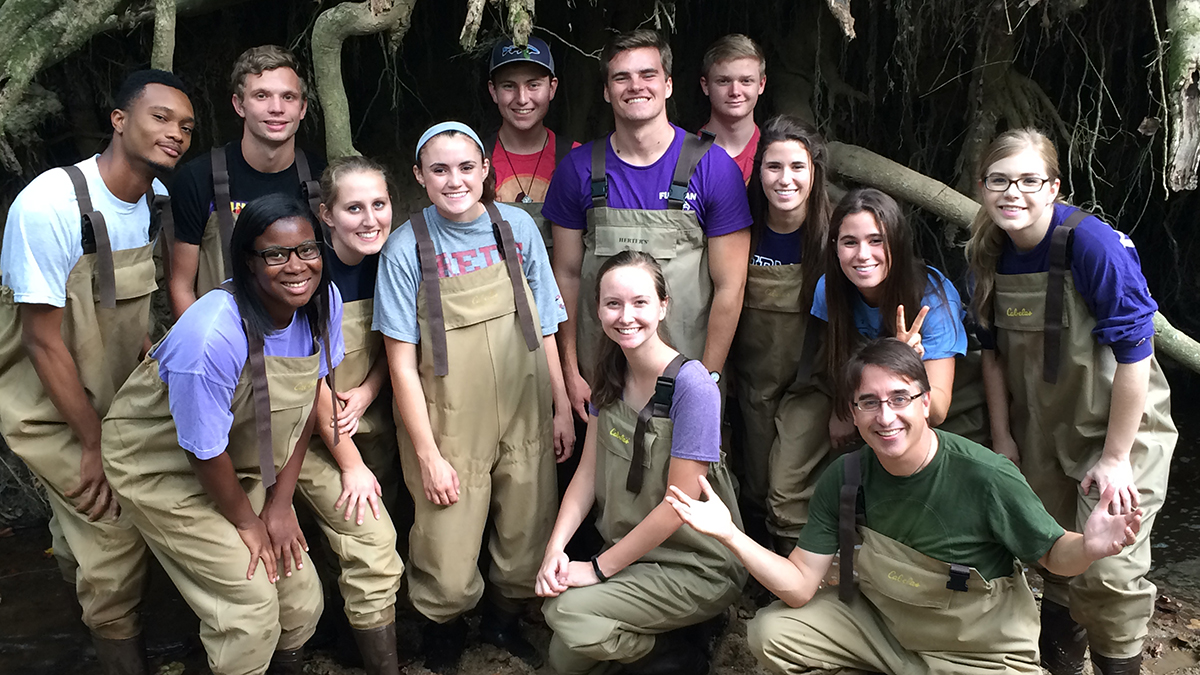 From there, Dripps explored a range of roles. He earned a master’s degree in earth science from Dartmouth College and traveled around the world working as an exploration geologist and consultant in search of oil, gas, and water. But it was a stint teaching 10th grade Earth Science at a boarding school in the Swiss Alps that changed the trajectory of his career. “I had been a teaching assistant in college and graduate school, but in Switzerland I was completely in charge of the content and design of a course from start to finish; I absolutely loved that challenge,” says Dripps. “I was living in the Swiss Alps at the base of the Matterhorn and could talk about glaciers in class and then take students out to the base of a glacier that afternoon. It was experiential learning at its best! I knew I wanted to be a teacher.”

Dripps went on to complete a Ph.D. at the University of Wisconsin in geology and geophysics. He spent a year at the Massachusetts Institute of Technology as a researcher in the Civil and Environmental Engineering Department before taking his first job in higher education as an assistant professor at the University of Massachusetts – Boston. “I loved my three years at UMass, but when an opening at Furman University became available, I jumped at the opportunity to be at a liberal arts institution where teaching, not research, was the emphasis.”

“Although I am trained as a classical geologist, since coming to Furman in 2005, my interest and work has expanded to include environmental science, and more recently sustainability science. When people think of earth science, rocks, minerals, and fossils come to mind, but they often don’t understand the breadth of earth systems science and its impact on our daily routines: the water we drink, the air we breathe, the soil that grows our food, and the energy we generate.”

The grand challenge of sustainability science lies in finding ways to elevate the standard of living for all humans above the necessary social foundation that protects against critical human deprivation while at the same time lowering the environmental impact below the crucial natural thresholds, and in doing so, live within what economist Kate Raworth deems ‘the safe and just operating space for humanity. The challenge of moving into this space for humanity is complex because social and planetary boundaries are interdependent.

Dripps brings this broader systems perspective to Furman, where for the past two years he has split his time between teaching earth science and environmental science courses and leading the David E. Shi Center for Sustainability. The center’s focus is to infuse sustainability across the curriculum and to get students thinking about long-term environmental, social, and economic sustainability. Recent decades have seen the emergence of sustainability as a concept central to the development and future of humankind. As Dripps explains, sustainability science is a rapidly emerging interdisciplinary field that aims to develop a deeper and more fundamental understanding of the critical linkages between environmental, social, and economic systems at a variety of spatial and temporal scales. Within this new discipline, Furman has been at the cutting edge of curriculum development with a science major in sustainability science, which Dripps helped create.

“The grand challenge of sustainability science lies in finding ways to elevate the standard of living for all humans above the necessary social foundation that protects against critical human deprivation while at the same time lowering the environmental impact below the crucial natural thresholds, and in doing so, live within what economist Kate Raworth deems ‘the safe and just operating space for humanity,’” says Dripps. “The challenge of moving into this space for humanity is complex because social and planetary boundaries are interdependent. It really becomes a question of equity reallocation if we want those without to have a chance at even a basic quality of life, and that will be hard. At Furman we are encouraging students to become systems thinkers, to tackle issues as a whole rather than through a disciplinary lens only. Our faculty are now working across traditionally siloed disciplines co-teaching, hosting workshops, and conducting research with students. This is from where the solutions for today’s sustainability problems will emerge.”

As part of the sustainability science degree, students must complete either a thesis or a group practicum project. “We want students to have to grapple with a real world sustainability problem and come up with viable solutions as part of their education,” notes Dripps. This past year, Dripps helped a group of 16 students work to address and develop detailed, integrated, and holistic vision and master plans for different sustainability campus sectors, including alternative transportation, eco-friendly landscaping, and sustainable food systems. Each of these projects is a launching point for systems thinking.

“We’re not training someone to go work in a sustainability job in a hospital or grocery store per se; we’re creating systems thinkers and allowing students to apply that philosophy and framework to whatever career they choose. We are giving students the tools to maximize their opportunities and impact their world.”

Weston Dripps ’88 was a Lifer at The Haverford School and the Key Man of his class. He went on to study geosciences at Amherst College (B.A.), Dartmouth College (M.S.), and the University of Wisconsin (Ph.D.). While pursuing his degrees, Dripps worked as an exploration geologist in the oil, gas, and water sector, an environmental consultant, a hydrogeologist, and a high school teacher. Following his doctorate degree, Dripps was a researcher at the Massachusetts Institute of Technology in the Department of Environmental and Civil Engineering and an assistant professor at the University of Massachusetts – Boston. He joined the faculty at Furman University in 2005, where he is executive director of the David E. Shi Center for Sustainability and associate professor of earth and environmental sciences. Dripps has won Furman’s Meritorious Teaching Award (2008), Student Organization Advisor of the Year (2009), Engaged Living Award (2013), and Meritorious Advising Award (2015).