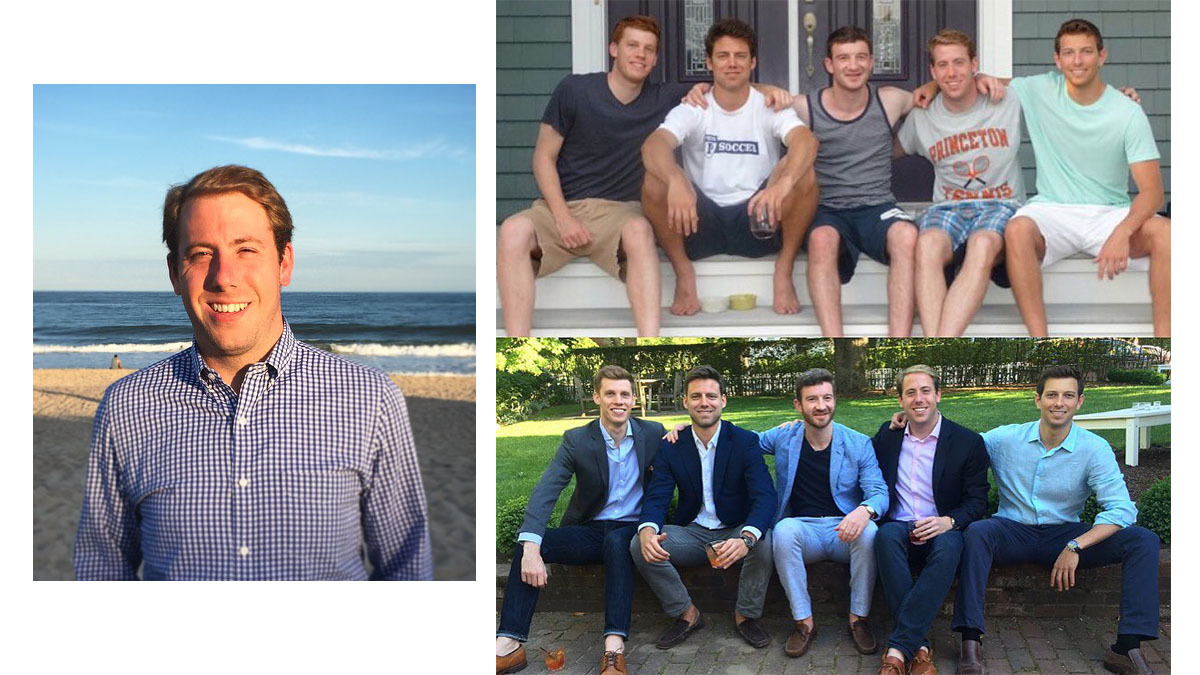 1. Can you recount a memorable Haverford experience?

Whether it was a raucous EA Day, celebrating a cross-country or tennis win, a solemn Reflections assembly, or all of our friends giving each other a hard time at lunch, every moment at Haverford contributed to how fondly I look back on my time there. As an individual, Haverford empowered me to be myself and to attempt to excel in a variety of areas, in particular academics, athletics, and extracurriculars, such as The Haligoluk. Thanks to the great teachers I had, I couldn't imagine being more prepared for college and the next steps following Upper School. However, more importantly, the simplest way to frame Haverford's effect on me and my dozen years since graduating is that my closest friends all came from the Class of 2005. We're heading into our 14th consecutive fantasy football season (and my 8th as commissioner); we've attended each other's weddings and bachelor parties (with more to come); we see each other every Thanksgiving Eve for an all-too-rowdy night; and we still reminisce on all the little things that made our time at Haverford together unique and memorable.

2. Can you trace your career path in venture capital?

As I was heading back to get my MBA after a couple years of working in investment banking, I cold-emailed over 100 venture capitalists to see if they'd be willing to talk to me about how I should spend my two years in business school (assuming the goal was to end up in venture capital as a career). One of the investors I emailed was Chris Sacca (now of Shark Tank fame), who had a fund called Lowercase Capital. I eventually convinced Chris to let me work part-time for him for free while I was in school. Getting to work for and learn from Chris was the original catalyst for my career in startups. Working with Lowercase and the portfolio companies allowed me to meet Josh Kopelman, another venture capitalist, who introduced me to the founder of Wanelo, the startup I joined in San Francisco after graduating. Getting to be in San Francisco allowed me to be at the epicenter of the tech world, which is where I met Tim Komada, the managing partner at Deep Fork Capital, the seed fund I joined after Wanelo. I joined Anchorage Capital Group earlier this year after meeting a managing director who wanted to learn more about a Deep Fork portfolio company. This career path, which has been driven by relationships, is not uncommon in many fields, but especially early stage tech, and it's one of the most rewarding aspects of being part of this community. It's a close-knit ecosystem that is built on people paying it forward and playing the long game.

Being a venture capitalist and getting to work with entrepreneurs on a daily basis is the ultimate privilege. Every day, I work and meet with people who are their own bosses and have decided to devote their lives to building something from scratch that they think can change the world. I usually spend my day taking at least a few pitches from companies that we are looking to invest in, talking to founders of companies we've already invested in, and researching a new industry or reaching out to founders whom I want to meet. Meeting and building relationships with new people is a huge part of the job, but getting to evaluate new tech is also critical and really fun. I get to experience everything from virtual and augmented reality to autonomous vehicles to the newest weird social app. 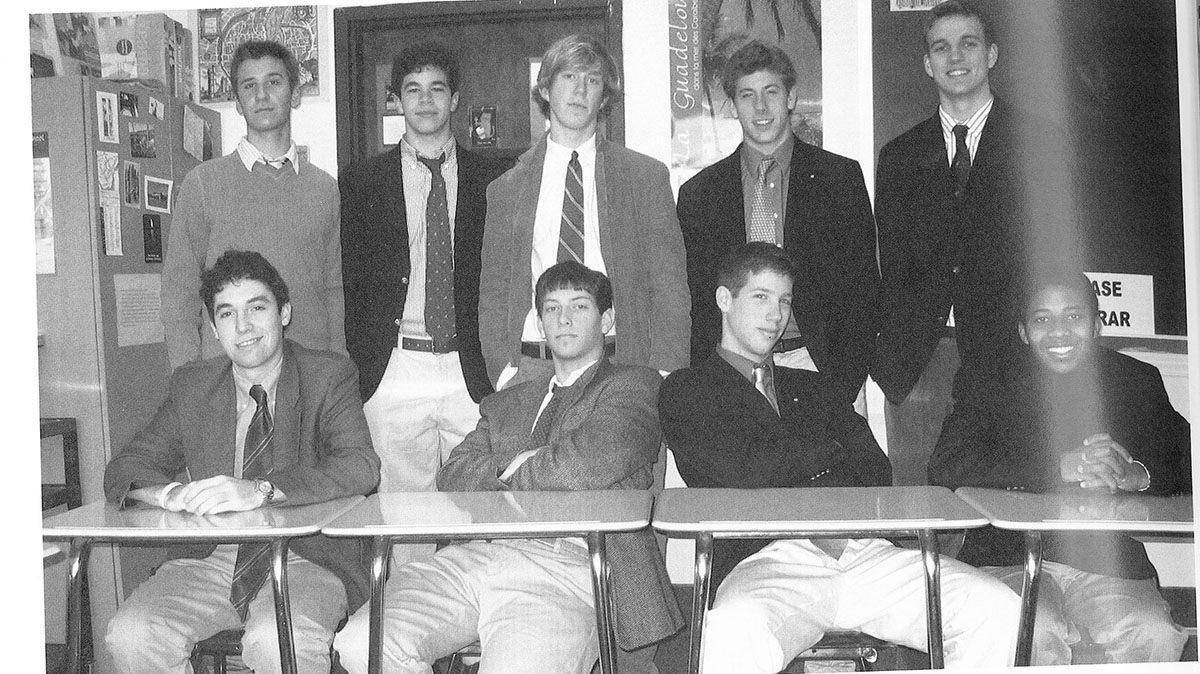 Adam (top row, second from right) with the staff of The Haligoluk in 2005.

As an individual, Haverford empowered me to be myself and to attempt to excel in a variety of areas, in particular academics, athletics, and extracurriculars, such as The Haligoluk. Thanks to the great teachers I had, I couldn't imagine being more prepared for college and the next steps following Upper School.

3. What was the motivation behind starting your blog, Ventureminded?

I started my blog when I was in the early stages of reaching out to venture capitalists. A young venture capitalist told me I should have a place on the Internet where I shared my opinions and exhibited my writing skills, regardless of whether I wrote about tech or not. So it really started as a way of demonstrating that I could write effectively. I also wanted it to show up when people Googled me, so they could see my opinions on various tech-related topics. Over the years, it's become the most effective way for me to share long form thoughts about different startup topics and a great source of deal flow, so founders and other investors know what I'm most interested in. Even though I tweet a lot, blogging about a certain topics feels more "permanent" and gets shared more easily. CB Insights even included me as one of the top bloggers on its "Periodic Table of Venture Capitalist Bloggers."

4. Do you have any advice for Haverford students on how to make the most of their education?

My number one piece of advice for current students is to take advantage of the fact that they have more control over your education, can learn from more sources, and have access to more resources than ever before. Certainly, you should focus on your "real" coursework and leverage the opportunities that Haverford provides you, but given the proliferation of the Internet and technology, there are myriad ways to explore and develop passions and interests that aren't available through traditional classes and extracurriculars. Use services like Twitter to follow, learn from, and connect with people in fields or industries you care about (I probably email with or help out a high school student at least once a month and have been even pitched by a few high school students building companies!). Hang out on YouTube and Reddit to broaden your horizons and cultivate new interests. Over the last dozen years since graduating from Haverford, I've learned to value experiences over physical objects and assets, and the vast majority of those experiences were catalyzed by following my passions and interests and wanting to learn more about them.

Adam Besvinick '05 was fortunate enough to come to Haverford in 4th grade and spend the next 9 years at the school. After Haverford, he went on to earn a BA in Public Policy Studies from Duke University and an MBA from Harvard Business School. After a start in finance, Adam made the move over to early stage tech startups and has been working with them as an investor, advisor, or employee for the last 6+ years. Currently, he is a venture capitalist at Anchorage Capital Group in New York City, where he focuses exclusively on Series A and later venture investments for the firm's private investment fund. When not working, Adam can usually be found trying to play as much tennis in the city as possible, going to new restaurants, and watching Philly sports and Duke basketball.