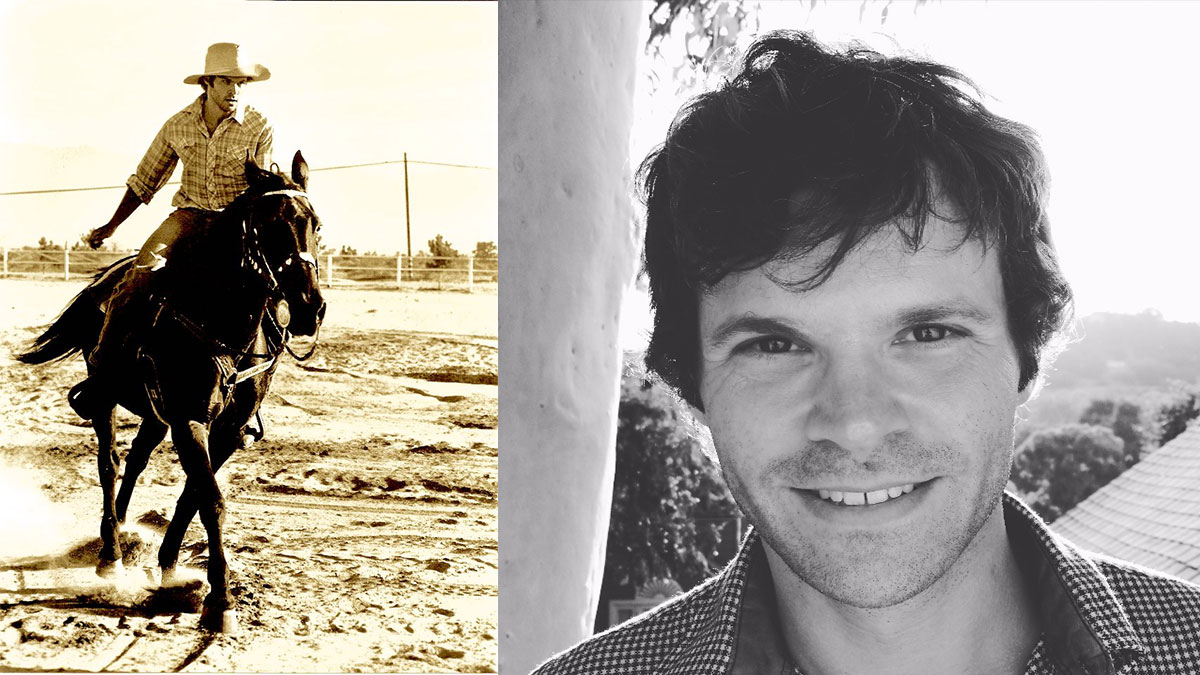 Can you recount a memorable Haverford experience?

I started at Haverford in Form I, and my first memory is of the great George Haines: he told me to keep the handshake firm and maintain eye contact. He then said, “You look like a squash player.” Who was I to doubt it? I went out for a sport I’d never seen before, and for which my love has grown into a lifelong passion. A year ago, I became the president of the Southern California Squash Racquets Association, and at my wedding, squash players made up such a large contingent of guests that we had a coed squash bachelor party at the Los Angeles Athletic Club the night before the day.

I have had the good fortune of many careers and pursuits - cowboy, writer, photographer, actor- but the one that has been most consistent, remunerative, and meaningful has been working with young people to help them sharpen their powers of observation, understanding, and expression. This aim lends itself well to the life of independent schools. I am happiest in a classroom of 7th graders reading Othello, because there I am most likely to be knocked off balance by the thoughts of others and most likely to be of service to others.

In my current role at Deep Springs College, I don’t get to spend a lot of time with students, but the work is exciting for another reason: every single person you meet has something to say about education, because just about everyone either is or has been a student or has a kid who’s a student. People generally think experience in school matters- individually and civically. I find that engaging people on the topic of education often brings to the surface one’s own deeply held views, assumption, hopes, or complaints about life in the universe well beyond schools.

Don’t let the great privilege of attending Haverford lead you to seek refuge among the like-minded; let it embolden you to learn how to speak with anyone and to listen carefully to everyone.

How do you think current students should make the most of their Haverford education?

I do not presume to tell people how they should use their time at Haverford, but that does not prevent me from reminding them that the time is special. In any endeavor whose aim is growth, I would encourage students to seek out and enjoy discomfort. Take a second language, learn to draw, go out for the play, learn to play chess, try a new instrument, challenge yourself for no strategic reason at all. Perhaps the most important of these is social: befriend someone with whom you appear to have nothing in common. Sit at lunch next to someone with whom you are likely to disagree with most. Don’t let the great privilege of attending Haverford lead you to seek refuge among the like-minded; let it embolden you to learn how to speak with anyone and to listen carefully to everyone.

How do you stay connected to the Haverford community?

I attend the annual lunch graciously hosted by Jeff Warren ’82 at the LA Country Club, and caught up with Jamie Ford ’94, Scott Burkhardt ’94, and Will O’Donnell ’94 a year ago at Jamie’s place in Napa.  Peter Morris ’91 was one of my groomsmen, and we get to catch up when his writing brings him to Hollywood for TV and film.

I also had a classic Haverford encounter a few years back. I had just started the first school squash team in Los Angeles, and we were using a very underused court at the downtown California Club for middle school try-outs. The kids were all dashing around on court doing a boast-drop-drive drill, and I noticed an older gentleman standing transfixed on the other side of the glass back wall. I introduced myself, and he said, “I’m sorry to linger at your practice; it’s just that I haven’t seen young people playing squash since I was their age.” It didn’t take Jamie Shoch ’59 and I very long to figure out we had both played squash at The Haverford School, separated by some forty years.

John Dewis graduated from The Haverford School in 1994 and then completed the 2-year program at Deep Springs College, finishing with his BA from Harvard. John has his MA in Philosophy from Claremont, where he and his wife Courtney met in a seminar on the pre-Socratics. John runs his own boutique tutoring service over Skype for all things college admissions, including statistically unlikely jumps on standardized tests. For students who cannot afford his statistically unlikely fee, he has written a free e-book entitled “Hack the College Essay” (hackthecollegeessay.com). John’s students regularly enjoy admission to the most competitive colleges including all the Ivies. He has taught most subjects in many private schools and served as the Dean of the Episcopal School in Hollywood (leading its successful accreditation and helping to grow the student body from 20 to 120) and on the founding faculty of Sequoyah High School in Pasadena, before returning to Deep Springs College as their Development Director one year ago. John is an obsessive squash player and serves as president of the Southern California Squash Racquets Association whose aim is to promote the sport in the region. His wife Courtney is Dean of Student Life at the Gooden School in Sierra Madre, CA, where she also teaches Mathematics, Ethics, and looks after the garden and chickens. Courtney and John live in South Pasadena with their baby son John.