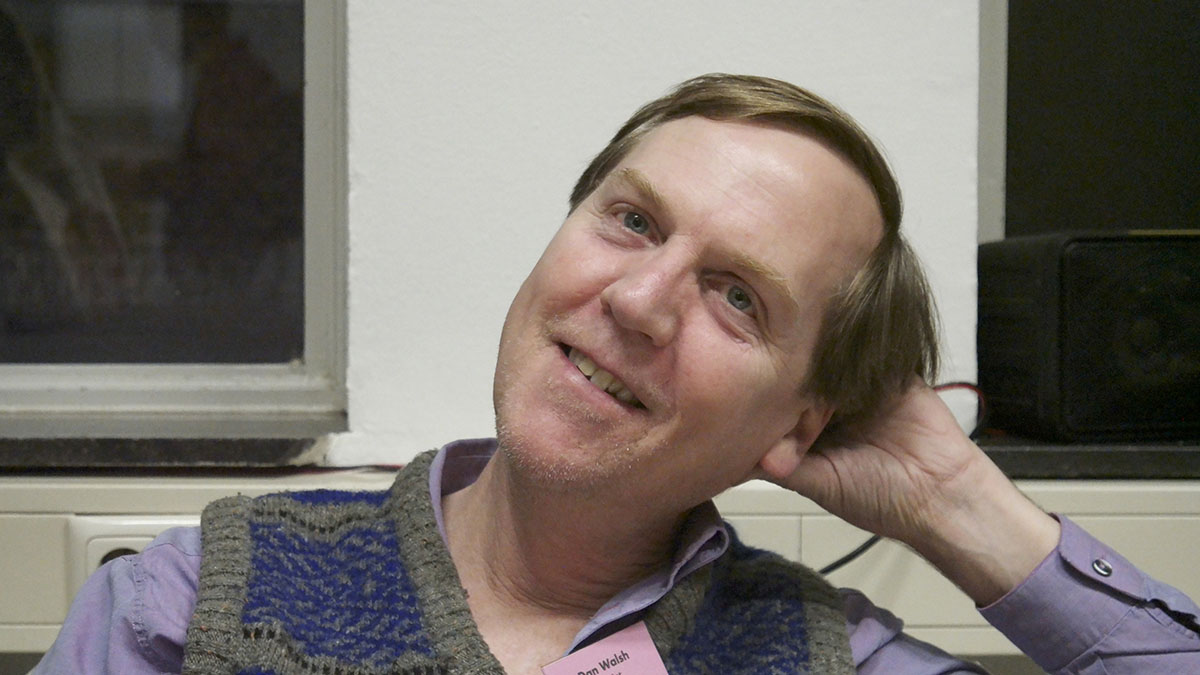 Do you have a particular theme or messages you try to convey through your paintings?

Process and interactivity. My method has self-imposed rules, but the paintings are always open. A mental space, with allusions to the history of painting. I’m not telling a story as much as creating conditions for looking. My paintings are meditational for me as well as the viewer. I often refer to Tibetan mandalas. I started from Minimalism and continue to use the grid. But now I call myself a maximalist – getting the most out of minimal actions.

Do you have a particular favorite exhibition that you’ve been involved in?

Definitely the collaboration with my sister, Lexa. In 2016, we were invited to do an experimental exhibition at Williams College Museum of Art. I am more of a formalist; my sister gravitates to art as social practice. So, from these opposing approaches, we created a group of objects and scenarios to show a new way to look at the museum’s collection. The show centered on five large archetypal structures that were also vehicles to hold art works. Each structure would hold a certain category of art, for instance, devotional, ceremonial, everyday objects, etc. On the perimeter we hung all portraits. We were given a lot of freedom. It was a blast.

I had some great friends and a lot of fun at Haverford. I was quite involved with the three intramural sports. That was lots of fun. I felt I was part of something at Haverford. I feel the same way now. I have a strong dialogue with my colleagues.

What lessons from Haverford do you carry with you?

Building a sense of community. I had some great friends and a lot of fun at Haverford. I was quite involved with the three intramural sports. That was lots of fun. I felt I was part of something at Haverford. I feel the same way now. I have a strong dialogue with my colleagues.

What advice do you have for current students or young alums, especially those who may be interested in pursuing a career in art?

I always liked art. When I was in New Hampshire, studying forestry, I took my first painting class. My teacher was very impressed. She and another faculty member convinced me to go to art school. That was Philadelphia College of Art, now UArts. I immediately found I was in my element and that art was what I wanted to pursue.

A career in art can take many turns. I would say: don’t force it. There are many forms art can take. How was I to know that I would excel in sculpture, bookmaking, curating, and printing, besides painting? It is a great way to look at and understand the world. But, of course, it’s not easy to make a living. In the end, it’s not about the money. Art is bigger than us. It’s a belief. For instance, I was an electrician for 15 years while trying to show my work. But when you do succeed, after years of no immediate return, it is particularly rewarding.

Dan Walsh ’78 is a painter, printmaker, and bookmaker based in New York. He received a BFA from University of the Arts (formerly Philadelphia College of Art), Philadelphia, and an MFA from Hunter College, City University of New York. His work is included in public collections around the world, including the Fonds National d’Art Contemporain, Paris; the Museum of Modern Art, New York; the Art Institute of Chicago; and the Victoria and Albert Museum, London. It has been exhibited at P.S. 1 Contemporary Art Center in Long Island City; the New Museum in New York; the Centre National d’Art Contemporain in Nice; the Speerstra Foundation in Lausanne; the Rhode Island School of Design Museum of Art in Providence; and the Kunstverein Medienturm, Graz. His prints and limited-edition books were the subject of a one-person exhibition at the Cabinet des Estampes in Geneva, Switzerland. He was also included in the Ljubljana Biennial, Slovenia, the Lyon Biennial of Contemporary Art, France (both 2003), and the Whitney Biennial in spring 2014. Walsh’s paintings and books were recently on view in a year-long, one-person exhibition, titled “Pressing Matter” at the Bonnefantenmuseum, Maastricht (NL), in collaboration with Jan van Eyck Academie, Maastricht, January 2019-January 2020.