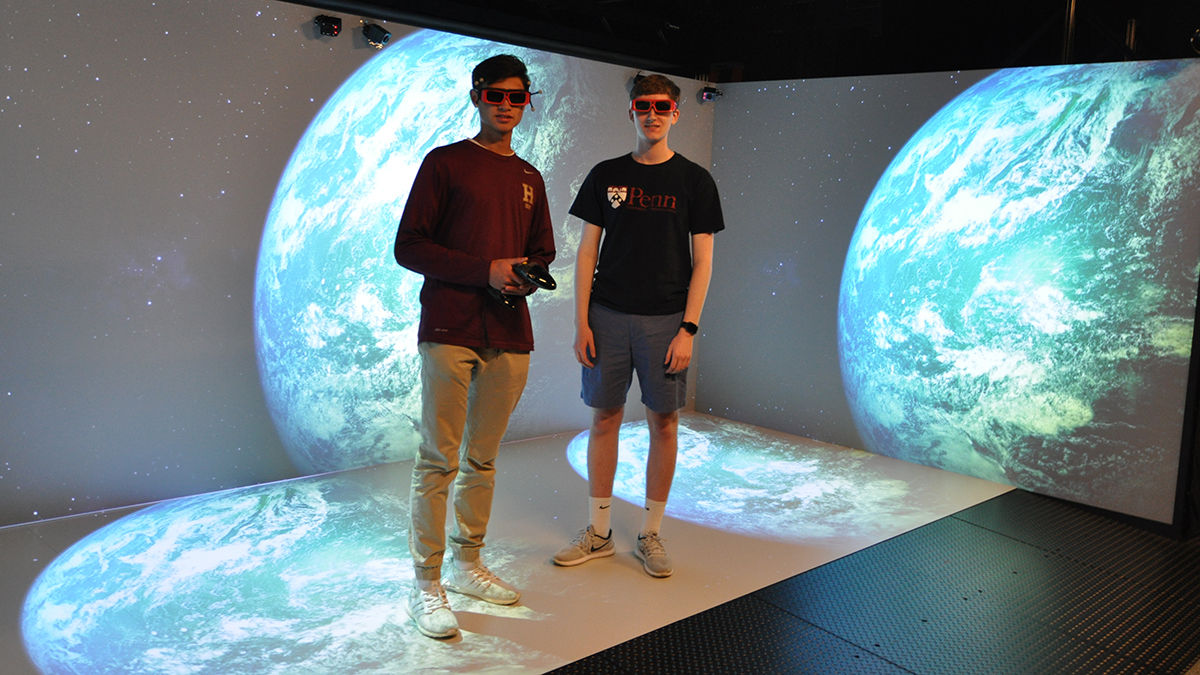 Elon Musk, CEO of SpaceX, says he would like to send people to live on Mars, but many people do not know exactly what that environment would be like. Dr. Frank Klassner, a professor at Villanova University, is working on a project to take images of different places on Mars and stitch them together to allow people to experience the Mars environment in virtual reality (VR). For our senior project, we compiled and edited some panoramas of the Martian landscapes that will be used in Dr. Klassner's final project.

First, we downloaded 100 or so landscape images, taken by the Curiosity Mars Rover, from NASA's website. We then put them into a program called PTGui, which stitches together the pictures based on matching parts called control points. But often the software would not find all the control points, so we had to manually stitch the images together by looking at overlapping images, pointing out the matching parts, and creating our own control points. 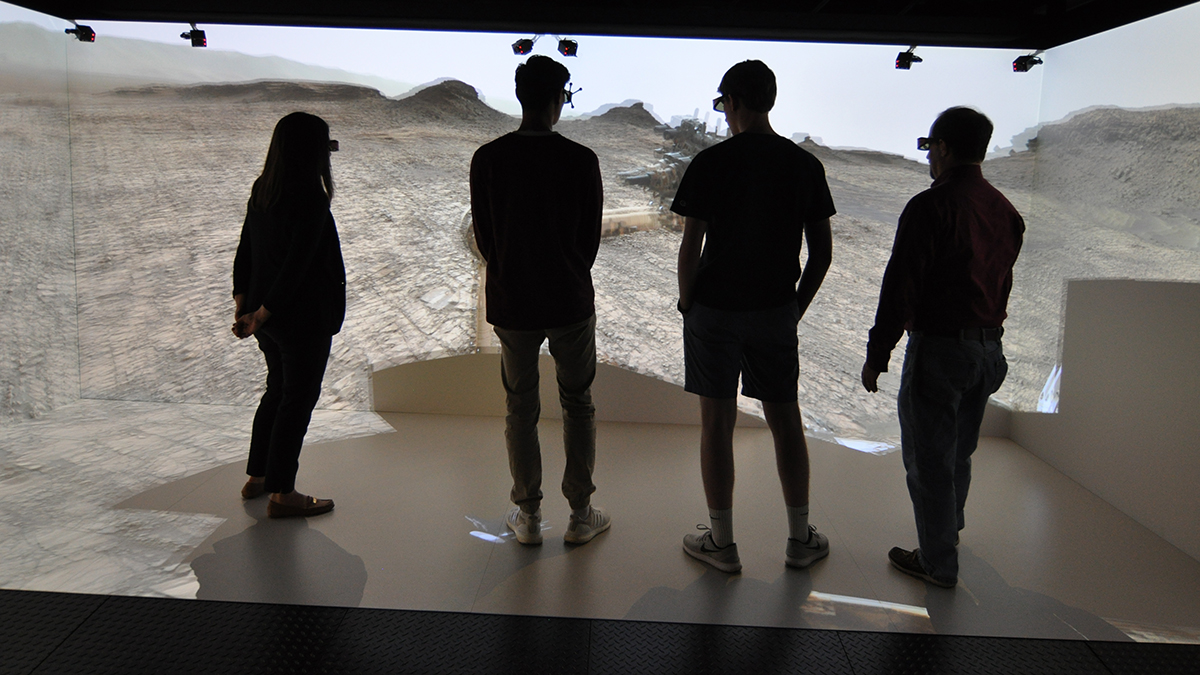 It is absolutely stunning seeing how different Mars is from Earth when viewing the landscapes in virtual reality. The project required hours of tedious and repetitive work, but the feeling that we got after we created these beautiful panoramas was fantastic.

We completed about 12 panoramas using this same process. After the photos were stitched together, the next step was to edit the lighting of each picture to get all of them relatively uniform. The rover often takes its images over the duration of a day or two and, especially when it points at the sun, it has irregularities in exposure. After we exported the panorama from the PTGui software, we made some final edits in Photoshop – cutting the sky out, adding a filler color to the portion where the rover didn't take pictures, and making our rectangular photo into a spherical image. Finally, we added a sky with a circular gradient for the sunspot and a lens flare which looks like a sun. We needed to make the panoramas into spheres because in the VR software, the panoramas are "painted" on the inside of spherical environments, which the viewer then can "step into" to look around their surroundings.

It is absolutely stunning seeing how different Mars is from Earth when viewing the landscapes in VR. We used a headset called an Oculus Rift to view the landscapes at Haverford. Villanova has an Immersive Studies CAVE, an enclosure with 4 projectable walls, an extendable projected ceiling, and eight movie theater projectors, that is designed to allow people to view and interact with 3-D environments like our panoramas. Once the full project is finished, it can be uploaded and viewed by other people in the CAVE at Villanova or, as Dr. Klassner plans, in a CAVE at the Franklin Institute as part of an exhibit. 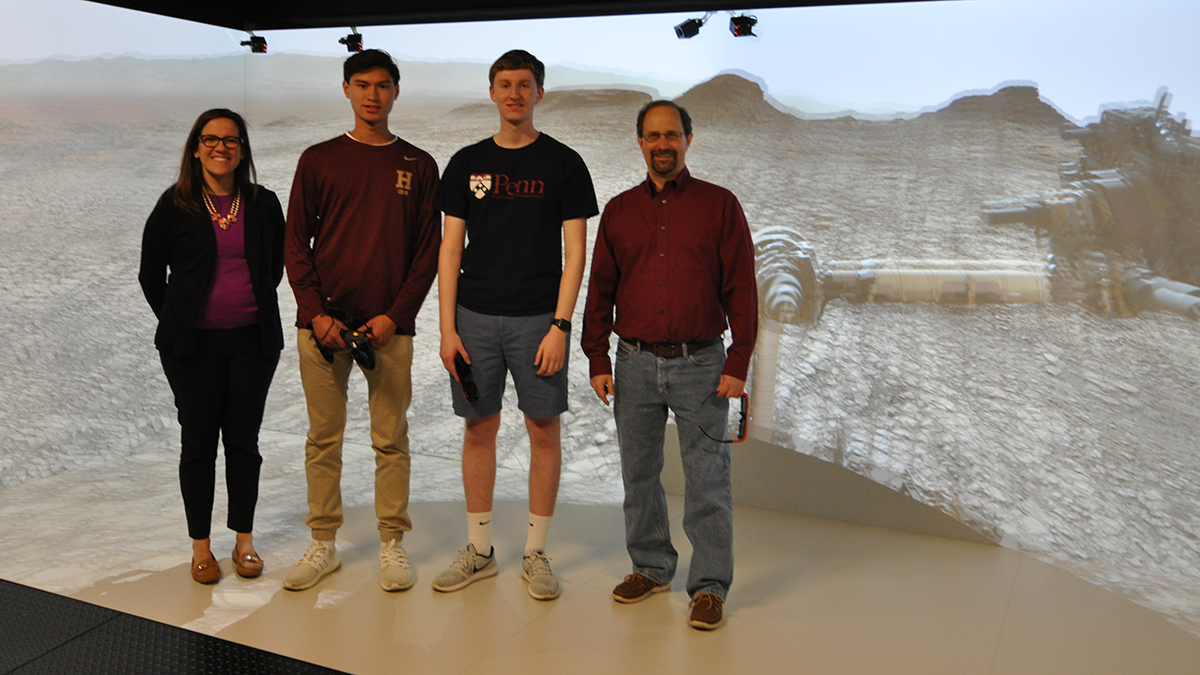 We learned a lot about teamwork, communication, and critical thinking through this project.

We learned a lot about teamwork, communication, and critical thinking through this project. The work tested our focus and perseverance as we spent many hours staring at rocks, trying to match lighting between pictures, and editing photos right down to the pixels. The project was a challenge and tested our abilities to think critically especially when taking on tasks we had no prior experience with. Kyle had limited knowledge of Photoshop, and David had limited knowledge of computer programming, so we searched through tutorials and forums to help us use the right Photoshop features and write the proper code. During the course of the project we ran into several problems such as Photoshop and stitching errors. It was helpful having a partner as we were able to help each other and we also contacted Dr. Klassner for guidance and advice.

The project required hours of tedious and repetitive work, but the feeling that we got after we created these beautiful panoramas was fantastic. We are grateful for the opportunity to work on this, and proud of our contributions to Dr. Klassner's larger project.