In education, "Maker Learning" is a technology-based extension of hands-on, project-based learning that allows traditional "making" to be reshaped and new forms to be pursued. "The grouping of traditional disciplines will likely disappear within the next decade," says Fox. "With the ready availability of web-based resources, teachers and schools can focus more on the development of essential skills and practices that transcend disciplines than ever before.

In my visual arts classes, we start each lesson with a question or problem rather than dictating a subject-specific assignment. By engaging in authentic experiences that require creativity, innovation, and invention, the boys' learning deepens.

In his Boys as Makers talk, Fox walked educators through his Creative Process diagram, and explained how it facilitates experiential and cross-discipline learning practices. "The Creative Process diagram enables boys to visualize an abstract concept or a methodology that is often misconstrued as chaotic," explains Fox. "We're framing a project without directing the outcome; we're structuring an open-ended, creative project such that the boys are crafting an outcome of their own design. In the process they are not only learning the specific goals of the project, but are becoming more adept at the overall practice; the goal being that the practice of making and doing new things in an art studio becomes transferable to other fields and activities. While it may be called 'creativity' in the art studio, the same practice is called 'invention' or 'innovation' in an engineering lab or 'entrepreneurship' in the business world."

Watch Fox's presentation from the 2015 IBSC in this video, and read his reflection on Boys as Makers below.

Boys as Makers - Chris Fox 2015 IBSC Presentation from The Haverford School on Vimeo.

My Boys as Makers action research project was in itself a "maker project." I had an initial idea about studying the intrinsic motivation of "making" and creating, but that shifted into developing a practice that could help to guide the maker process in the classroom in such a way as to make a more recognizable and repeatable process.

The majority of the work I already do with my visual arts students can be described as "maker learning" projects. In my action research project I worked with both existing curriculum and new elements suggested by the research and readings I had done in preparation for my own project.

I created a practice of breaking down all class projects into specific stages associated with a Creative Process diagram I created to help students visualize the maker process. I asked students to create blog posts at each of these stages in a project on which they were working. In general they were asked to describe what they were doing, how they were going about it, and why they were doing what they were doing. What they described gave me immediate feedback about their learning and suggested ways in which I might adjust the activity. 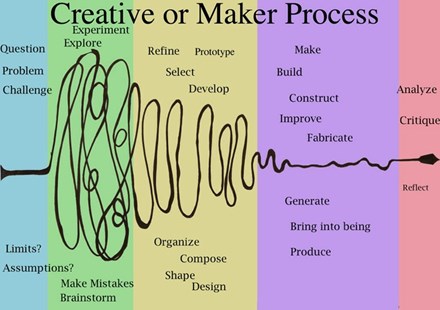 Throughout the school year, with each new project, I was able to make changes to (to tinker with) the practice based on the results of the previous project. As a result I learned so much more than I had suspected about my own teaching practices and how boys learn. Even with projects I had done before, I found new ways of making them more engaging and successful as a result of both the readings I have done and the new methodologies at work in my classroom.

One example of changes in my own practice came from readings in the neuroscience literature that suggested, "the one who does the work does the learning." I realized the well-researched presentations I was preparing for my students at the beginning of a project were actually great learning experiences for me but were denying my students some of the learning and in the end were leading them to the results I expected rather than the results they might discover on their own. I switched in the course of the school year to presentations that provided merely the guiding question of the project and a short list of search terms for the boys to research on their own. I still did my own research, but only shared the terms I though might get the boys started on an interesting track.

It is this aspect of the current "maker movement" I find most powerful, not all the Arduino boards, 3D printers and other gadgets, but the connectivity that some of those new technologies have enabled. I no longer need to be the sole source of "instruction" nor do I need to create a curriculum bounded by my own knowledge.

The connectivity of the Internet as well as the connected devices in their own pockets allow boys immediate access to other sources of knowledge and to share their own. That opportunity for participation in the real world of knowledge and learning is as engaging as the maker process itself.

It is personally satisfying that a number of other teachers at Haverford outside of the art department have begun to use materials I developed as part of my action research with their own students. English teachers use the Creative Process diagram to help students visualize the work that goes into some of their longer-term writing assignments. The results of my action research project, in part, helped bring to life a new Upper School Maker Space shared by visual arts, engineering, and woodworking classes. My goals for the future are to continue to discover ways of helping my students engage in this authentic participatory learning community that we have just begun to explore.