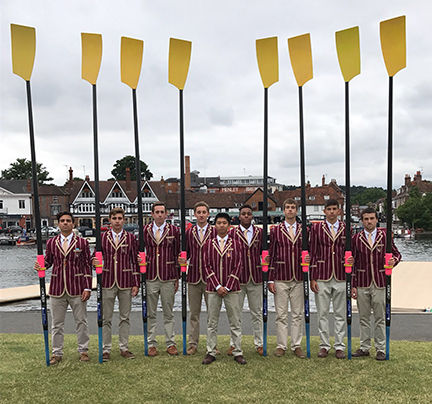 In a trip of a lifetime, student-athletes from The Haverford School crew team traveled to England to compete in one of the world's most prestigious rowing events: the Henley Royal Regatta, June 28-July 2. It was the first time since 1997 that Haverford has competed at Henley.

After a rigorous few weeks of training on the Schuylkill, and a few days practice on the Thames, the boys' Varsity Eight turned in what looked to be a very fast June 23 time trial qualifier, yet no one knew for sure. Nervous anticipation erupted into cheers as The Haverford School was announced as one of the schools that qualified for the main draw. Although the boys were defeated in the main event by a very fast Deerfield Academy boat from Massachusetts, the trip was a resounding success. Rowing in the Varsity Eight (by seat position) were Tim Scheuritzel, Davis Martinelli, Andrew Farmer, Henry Scarlato, Aiden Leavy, Joseph O'Brien, Michael Boston, Jack Costello, and Nelson Liu.

Highlights included rowing in the Reading Town Regatta in neighboring Reading, England, where Jeff Pendergast and David McKay defeated a team from Australia to come in first overall in the men's Intermediate Double; experiencing a proper British tea on the grounds of the regatta hosted by Haverford alumnus Blaine Krickl '59, who now lives in Henley; and attending a private party for the team and parents along with Malvern Prep at the exclusive Phyllis Court Club on the bank of the Thames. Also in attendance were Headmaster John Nagl, Head of Middle School Jay Greytok '83, and members of the Haverford School crew team of 1957. The trip was planned and coordinated by Head Coach Jonathan Stephanik (who also personally designed the team blazers), and the boys were joined by Assistant Coach John Suter. The team would like to thank the Friends of Haverford School Rowing, who made the trip possible, for their generosity and support.