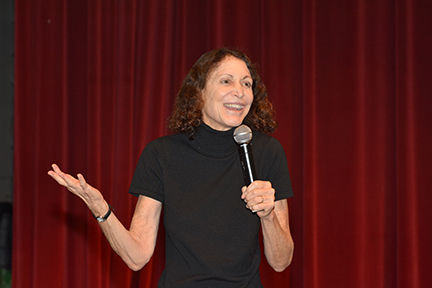 Jane Golden shared her thoughts on the relationship between public art and social change, and traced her career in public service, at the annual Joseph T. Cox Servant Leadership Symposium on Oct. 7.

As founder and executive director of Mural Arts Philadelphia, Golden has helped to create more than 3,800 works of public art across the city. But the murals and installations are more than a solitary artist painting on a wall. Golden talked about how the creative process starts with engaging communities to create art that addresses what they consider to be important issues.

"We [were] doing projects that represented peoples' lives: their stories, their struggles, their triumphs, their aspirations," Golden said. "Whatever we did, it was like holding up a mirror to people and saying, your life counts! You have meaning. Beauty is powerful but we also want meaning."

The Mural Arts program started in 1986 as part of city mayor Wilson Goode's initiative to create an anti-graffiti network. The power of art, Golden realized, came through its ability to ignite change in the city, starting with former graffiti writers who were looking for an outlet to express themselves.

In 1997, Mural Arts Philadelphia became its own entity under Mayor Ed Rendell. Golden talked about how Mural Arts programs and partnerships have expanded to allow more people to participate in the creation of public art, including students, through art education; people struggling with mental health, through the Porch Light program; and prison inmates and parolees, through the Restorative Justice program. 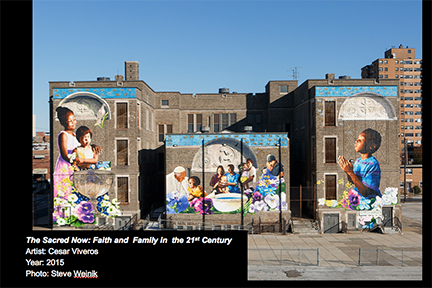 Mural Arts now partners with more than 200 artists a year, and is embedded in agencies around the city, but the art created still reflects the lives of its residents, with murals centered on topics such as immigration, homelessness and forgiveness.

Golden also talked about the Restored Spaces program, which cleans up and paints schools and recreation centers across the city.

"[A rec center] becomes this livable space and people in the neighborhood think it's a miracle," she said. "This isn't a miracle – it's just about pragmatic thinking and putting people to work around a creative process that benefits everybody." 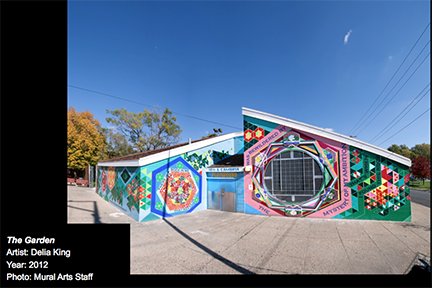 Golden traced her early career before Mural Arts, including the arduous application process for her first mural in Los Angeles, the shock of getting diagnosed with lupus in her 20s, and her decision to forgo law school to pursue her passion. Her advice to students was "to be resilient and tenacious, to be kind and empathic, and to most of all be fearless, because that's what it takes to move through life."

Golden's murals may beautify the city of Philadelphia, but the impact that she's had on individuals is what she sees as her responsibility in public service.

"What our responsibility was in 1986 is the same responsibility it is today, and that is to offer every young person every opportunity and option possible," she said. "I believe that art has a profound impact on people, but at the end of the day it is really our humanity that lights the torch that leads the way."

Jane Golden is founder and executive director of Mural Arts Philadelphia, and an adjunct professor at the University of Pennsylvania and Moore College of Art and Design. She has received numerous awards for her work, including the Philadelphia Award, the Visionary Woman Award from Moore College of Art and Design, and the 2012 Governor's Award for Innovation in the Arts. Golden has co-authored two books about the murals in Philadelphia and co-edited a third book, Mural Arts @ 30. She holds a Master of Fine Arts from the Mason Gross School of the Arts at Rutgers, and degrees in Fine Arts and Political Science from Stanford University. Read more about Jane >