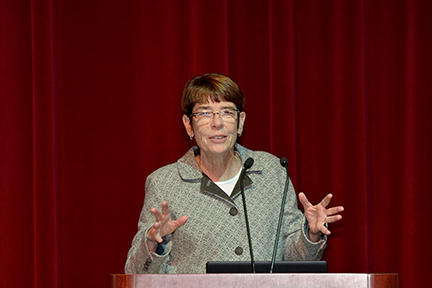 "The ultimate answer to chronic homelessness lives within all of us," Sister Mary Scullion noted when she addressed Upper School students at the sixth annual Joseph T. Cox Servant Leadership Symposium on Oct. 30. VI Former James McConnon, whose mother cofounded Project HOME in 1989 with Sister Mary, delivered the symposium's introduction. Sister Mary shared the message that there is a basic fundamental dignity within every person, ready to be illuminated by those who take the time to lend a hand. Drawing a parallel to the Knotted Grotto that put more than 150,000 struggles, hopes, and prayers on view during Pope Francis' visit, Sister Mary said, "We all have knots, we all have struggles. For many of us, they remain behind closed doors. But the knots and struggles of those who are homeless are in the public eye. By sharing our struggles, we become closer to one another and begin to loosen these knots that affect all of us."

We must look at that in an honest way and recognize what Martin Luther King Jr. challenged us to consider: whatever affects one directly, affects all indirectly.

Marc Wise is one such individual. His knots were on display throughout the years he spent living on steam grates and in the subway before receiving help through Project HOME. He spoke to the students about his experience living on the streets and urged them to help rather than to judge. "Sister Mary made me believe in myself again," said Wise. "There was a time in my life when I felt like an animal, but now I feel human again. It's important that you don't consider people on the street a lost cause; everyone has some good in them." Sister Mary also stressed that we need to work together to tackle the global issues of poverty, homelessness, and hunger to achieve a greater good. "Poverty and homelessness are prophetic signs in our community that something is radically wrong, that the fabric of our community has frayed," said Sister Mary. "We must look at that in an honest way and recognize what Martin Luther King Jr. challenged us to consider: whatever affects one directly, affects all indirectly. None of us are home until all of us are home. When we open ourselves to the pain and struggles of others, and find a way to participate and to touch that pain, we will all be transformed."

Sister Mary Scullion has been involved in service work and advocacy for those in need since 1978. In 1985 she cofounded Women of Hope, which provides permanent residential and support services for homeless, mentally ill women. In 1988, she launched the first Outreach Coordination Center in the nation, an innovative program integrating private and public agencies. In 1989, Sister Mary co-founded Project HOME, which provides supportive housing, employment, education, and health care to chronically homeless and low-income individuals. Sister Mary has received numerous honorary doctorates for her leadership in Philadelphia. She was named 2011 Citizen of the Year by the Philadelphia Inquirer and selected by Time Magazine as one of the "World's Most Influential People in 2009." Sister Mary and Joan Dawson McConnon received the Laetare Medal from the University of Notre Dame in 2011.