The Haverford School football team is a member of the Inter-Academic Athletic League of Philadelphia and Vicinity (Inter-Ac), the oldest high school league in the country.

The 2009 season was one of the best in school history, with the Fords compiling eight wins and finishing tied for the Inter-Ac Championship, their first since 1971. 2010 saw one of the most remarkable turnarounds in school and league history; after starting 0-6 against a tough non-league schedule, the Fords finished the season 5-0, winning all of their league games and capturing Haverford's first outright Inter-Ac title in 39 years. In 2012, Coach Murphy again led the Fords to the championship game undefeated. 2013 saw another share of the Inter-Ac. The 2014 season saw the Fords compile a 9-1 record, another high water mark in the school's history, and go undefeated in the Inter-Ac. The 2015 season bested that by one win with the team going undefeated at 10-0 (most wins in a season all time) and capturing their third straight Inter-Ac Title and fifth in seven years.

The football team boasts many time-honored traditions, including sports competition during Haverford/EA Day, dating back to 1889. 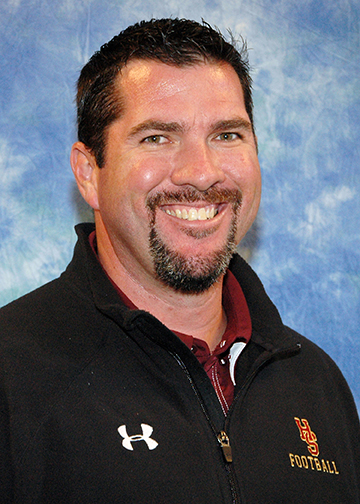 Brian Martin has been coaching football for 17 years at Haverford and took the reins from Mike Murphy in fall 2020 as head varsity football coach. Martin served as defensive coordinator during the most successful run of Haverford School Football from 2009-2015. During that time, the Fords captured five Inter-Ac titles in seven years, including three straight titles from 2013-2015.

Martin is a 16-year faculty member in the Physical Education Department and has coached lacrosse and Strength & Conditioning at Haverford.

Chris Sims, a senior co-captain and third-year starter at defensive back/wide receiver, has been called by Haverford head coach Brian Martin, “The heart and soul of our team." Read the full interview on PAPrepLive.com >

Chris Sims was All-Delco in track and field as a sophomore in 2019.

"When coronavirus hit, it felt wrong not having track season in the spring," said Sims, a rising senior at The Haverford School. "But in some ways, it was a blessing in disguise."

Read the full story in the Delco Times > 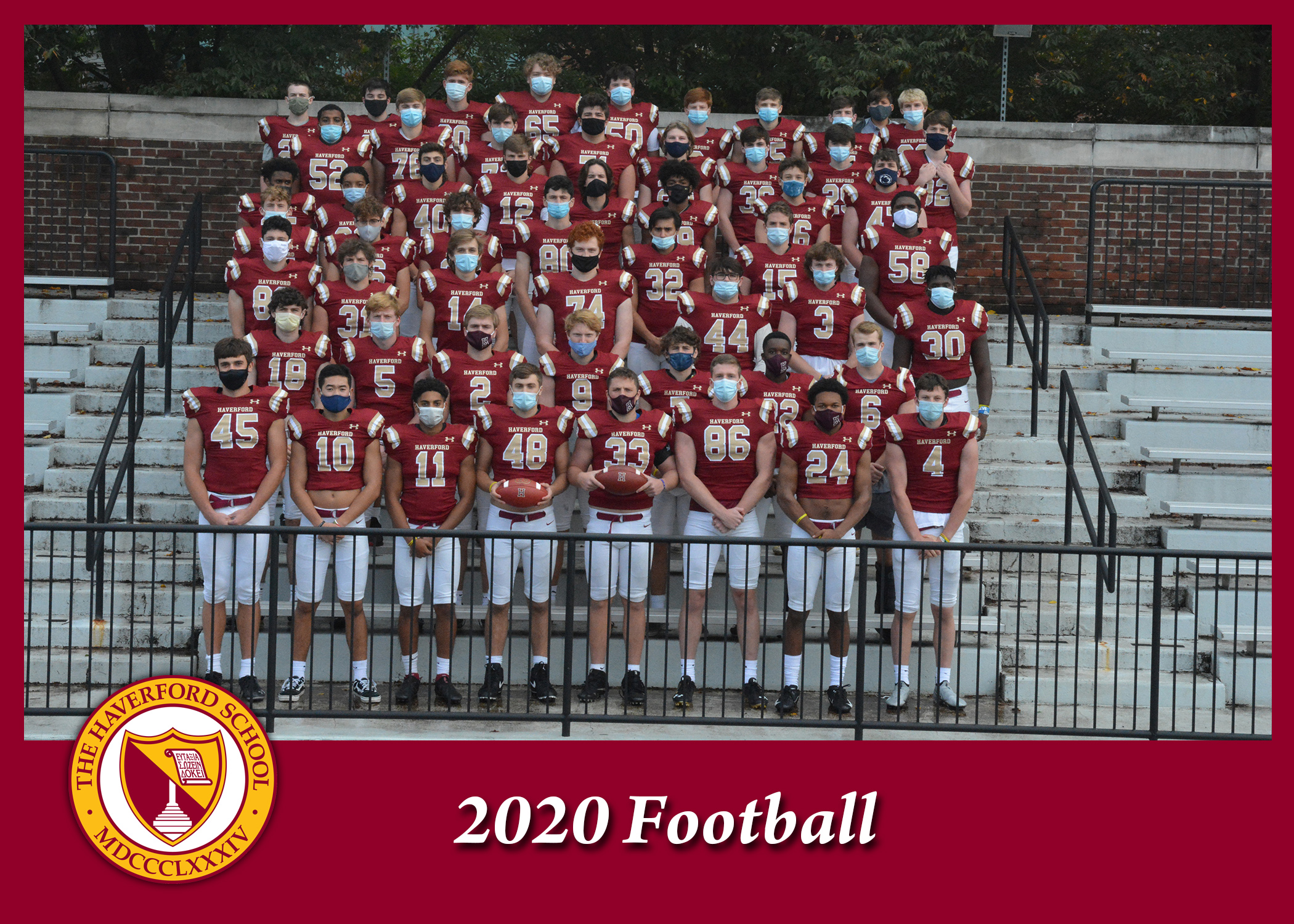 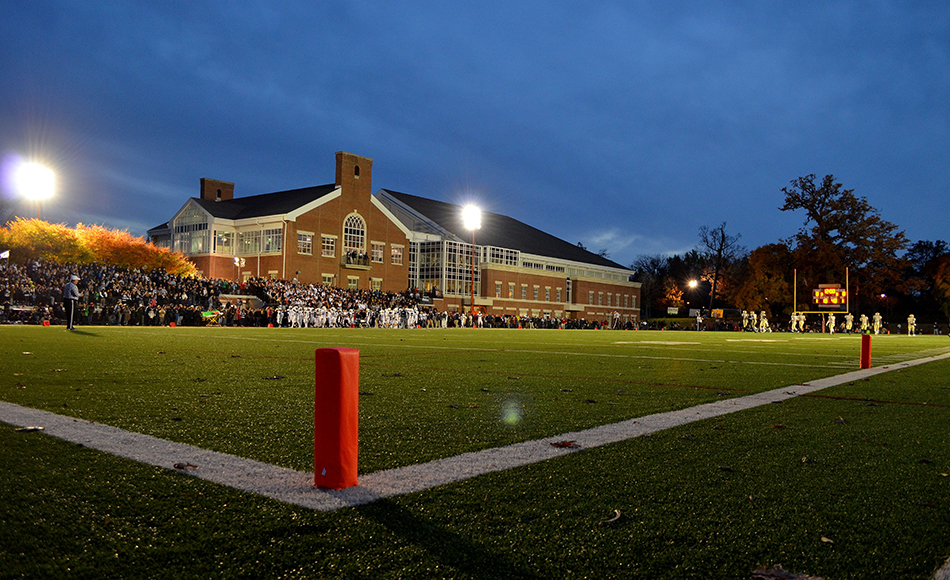 It seems ridiculous now, when every moment of every athletic event is memorialized on some version of video. From the most insignificant T-ball scrum to an Olympic final, there is a visual record available, easily accessed at the tap of a mouse or the click of a remote button. Not only has the revolution been televised; it’s available on Amazon for $29.99.

Back in the 1950s, there was no such ubiquitous lens. We can retrieve some archival footage of significant events, but it is often in poor condition, hampered by inadequate equipment, the vagaries of weather, operator inconsistency, and of course, the ravages of time. When Ed Sabol climbed a makeshift tower to chronicle his son’s football games at Haverford School, he was taking the home movie concept another step forward. Instead of filming young Steve smiling at a picnic or hugging some unidentified relative, Ed would track his athletic progress – for family eyes only.

Ed Sabol certainly didn’t look at it as a precursor to one of the most famous film companies ever established. What began as an exercise in creating a record of a son’s football exploits grew into NFL Films, which has served as a remarkable means for telling professional football’s story. Sabol’s first project, a recap of the 1962 league title game, was the springboard for today’s sizeable enterprise, which produces a menagerie of content that has helped the NFL grow from a sad sister to Major League Baseball into the nation’s most popular sporting religion.

And, to think, it all started on Haverford’s football field.

In 2009, that portion of historic Main Line real estate was named for the Sabols, whose impact on the game has stretched well beyond any crazy dreams Ed could have had when he convinced Pete Rozelle over drinks at legendary New York saloon Toots Shor’s to let him film that ’62 championship tilt. The plaque sitting hard by Haverford’s playing surface credits Sabol Field as being “the birthplace of NFL Films”, quite a designation.

“Steve played at Haverford, and the first filming his dad did of him was at Haverford,” says Mike Mayock, ’76, a charter member in the Haverford Athletic Hall of Fame. “His dad was a coat salesman, but he had a love of football, and he exhibited that through his son’s playing football. How fitting is it that the field where the whole thing effectively started is named for them?”

The Sabols’ impact on professional football – and the sport in general – cannot be overstated. They presented the sport not merely as a contest between two teams but as a dramatic saga. Men didn’t just compete against each other for an improved spot in the standings but to prove themselves, and by extension, demonstrate the unique American will to succeed. By placing cameras all over the field and going onto the sidelines, into the huddles and among the locker and meeting rooms that had been mysterious – if known at all – by fans, NFL Films created a vivid world that went beyond the wins and losses to humanize the sport and its participants. All of a sudden, players weren’t merely anonymous, helmeted gladiators. They became heroes and villains, strategists and generals, stars and tragic figures. And, yes, when the follies reel rolled, they were also comedians.

And there was music. NFL Films’ sights were amazing. The sounds were just as impressive. Long before music videos became part of the national consciousness, the Sabols were setting football action to tunes that made the presentation more exciting.

“Who would have thought of bringing an orchestra into the NFL Films building and setting football plays to a symphony?” Mayock asks.

That was Steve Sabol. His father was the consummate salesman, but it was Steve’s creativity that helped NFL Films break new ground and create a template for sports videos that continues today. When Sabol arrived at Colorado College in the early ‘60s, he decided he would add a little imagination to the work ethic he honed while an honors student at Haverford. He created a new persona for himself. “Sudden Death” Sabol from Coaltown Township, PA became a folk hero on and around the Colorado College campus. Sabol created press releases that hollered, “The Prince of Pigskin Pageantry was now at the Pinnacle of his Power”. Sabol’s genius for self-promotion was part of his brain’s magic, and when his father called him home to work for NFL Films, Steve took that creative energy and fashioned a football production worthy of Hollywood’s most famous cinematic giants.

“He was the most unique individual I ever met,” Mayock says.

Mayock speaks of walking into the NFL Films headquarters in Mount Laurel, NJ and observing Sabol’s “Picassos” producing projects unlike any others he – or anybody else – had seen. “Steve didn’t care about dollars and cents,” Mayock says. “He cared about what the project looked like. He hired great people and let them do their jobs.”

Steve Sabol succumbed to brain cancer in 2012, just shy of his 70th birthday. Ed passed away earlier this year at 98. Though they are no longer with us, what they built remains a bulwark of the American sporting scene and a transformative part of our athletic culture.

At Haverford, the Sabols live on at each practice and game that takes place on the field named for them. Their contributions to the NFL were enormous, and their impact on Haverford School is equally impressive. As the 2015 season dawns, and another Fords team charges out to battle the opposition on Sabol Field, the memory of Ed Sabol above the fray, capturing the action, of Steve on the turf below, wearing the Maroon and Gold enters the mind.

After all the magic the Sabols created over the years, how can we not feel their presence? It’s football, and nobody made it more vibrant than they did.

*Haverford stepped out of the Inter-Ac from 1906 through 1920, a self-imposed exile of 15 seasons

MOST ALL INTER-AC SELECTIONS FOR ONE SEASON