Training programs are designed to increase an athlete's overall strength, speed, agility, flexibility, conditioning, and competitive nature – all of which are important components in developing a highly-skilled high school athlete.

In order for all scholar-athletes to perform at a championship level, our coaches commit themselves to providing the time, expertise, competitive drive, and support to help athletes excel at the highest levels of competition.

A winning edge is the objective of the strength and conditioning program at The Haverford School and, with the positive attitude and collaboration of student-athletes and coaches, we believe championship performances can be attained through hard work and determination. 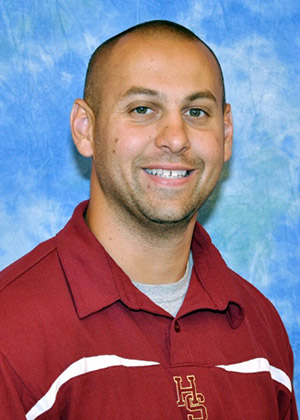 Matt Rosko has been motivating and coaching the student-athletes at The Haverford School since 2008. The high-energy coach, who was Haverford's 2015 Haverford School Coach of the Year, joined the School after spending five years working at the collegiate level. Rosko prides himself on maximizing the athletic talents of the students, as well as designing and implementing programs for multi-sport athletes.

Rosko began his professional career as an assistant strength and conditioning coach for St Joseph's University's men's and women's basketball teams. A former collegiate basketball player himself, Rosko helped design and implement programs to help the men's team finish the regular season undefeated, with a #1 seed in the NCAA Tournament and an Elite 8 appearance.

After two years with Saint Joseph's, Rosko trained and coached with Jim Schmitz, founder of USA Weightlifting and coach of the 1980, 1988, and 1992 Olympic weightlifting teams. He continued his career as Head Strength and Conditioning Coach at Iona College, where he designed and implemented programs for all sports. Rosko’s work with the Iona College football team helped propel them to their most successful football season in program history. In 2008, Rosko served as an assistant strength and conditioning coach at Villanova University.

Tweets by hs_strength
Powered by Finalsite