The Lower School String Ensemble offers boys a fun and challenging opportunity to gain experience playing in a group environment. In addition to performing a variety of repertoire from classical to pop, this ensemble reinforces the technical aspects of playing a string instrument. The Ensemble meets two mornings a week and includes major performances at the winter and spring concerts as well as an annual field trip.

A chime choir is very much like a bell choir except that the members ring hollow metal tubes of varying lengths in the place of bells. Chimes are perfectly suited for children in that they are very durable and do not require the extra care that traditional bells need. In rehearsals, the boys learn to read the rhythms for the chimes they play as well as basic techniques, including damping, swinging, and finger swinging.

Major Chime Choir performances include the winter and spring concerts, the Pre-kindergarten Luncheon, a field trip in the spring, and 5th grade graduation.

The Fantastic Fords is a concert band comprised of a variety of woodwind, brass, and percussion instruments. The Fantastic Fords doubles as the pep band as well, performing at the EA Day Pep Rally and a football game every year. Major performances for the Fantastic Fords include the winter and spring concerts as well as a field trip into the community each spring.

The Haverford Orchestra is an auditioned ensemble in which students learn to phrase artistically and develop techniques of articulation, expanded dynamic range, and stylistic interpretation through performance of a range of repertoire covering multiple styles and genres. Orchestra members develop ensemble skills such as leading, critical listening, and collaboration. In addition, students refine technical skills on their instruments. Students must demonstrate satisfactory ability on their principal instrument to participate, as determined by the director.

The small chamber ensembles are select groups of students that refine their musical skills by studying and performing literature from the standard chamber music repertoire. They focus on advanced skills of playing solo within a small ensemble while matching bow strokes, articulations, tone colors, and interpretations.

The ensembles meet one morning per week and perform throughout the school year.

The Haverford School Jazz Ensemble is an extra-curricular ensemble in which students perform a variety of contemporary, jazz-influenced arrangements for winds, brass, and percussion. Students learn the skills of performing in an ensemble. More advanced students apply their skills and knowledge to the art of improvisation. Students audition and must demonstrate a satisfactory skill level to participate, as determined by the director.

Performances include school functions as well as evening concerts in the winter and spring. Students must inform their advisor and the Jazz Ensemble Director of their intent for this activity to count towards their Arts graduation requirement.

Coro Primo, or First Choir, is the first step in Haverford’s choral offerings. The Coro Primo experience provides a fun and challenging opportunity for children to learn ensemble singing in unison and in simple part work. This is part of our second grade music curriculum; every student participates.

Coro Primo has age appropriate daytime performance opportunities and one evening concert in the spring. The first performance kicks off the Dr. Martin Luther King, Jr. Day activities at The Haverford School. After this opening performance, the boys are encouraged to participate with their families in the many volunteer opportunities that make up that special morning. In the spring, there is a field trip to perform at a nursing/retirement home.

The Treble Choir is the second step on the journey to learning choral singing at The Haverford School. Comprised of all 3rd and 4th grade boys in the School, the Treble Choir continues to develop proper singing technique including posture, core breathing, proper phonation, breath support and control, diction, and phrasing. Boys learn to perform music from various genres, cultures, and languages in unison, two, three, or even four parts. Score reading is emphasized so that students understand the layering that occurs in composition and are able to recognize and distinguish their part from others’. Elements of the music are used as teaching opportunities such as repeats, first and second endings, dynamics, accents, and form.

The Haverford School Centennial Singers is an elective for boys with unchanged voices who love to sing and perform. All boys are invited to participate. The boys sing in a variety of languages and styles in unison, two, and three parts. They rehearse three mornings per week; once in a sectional rehearsal and twice as a full choir.

The Centennial Singers perform twice a year at the major concerts of The Haverford School as well as at festivals and in the wider community.

The Haverford School Celebrantes is an elective for boys with unchanged voices. The Celebrantes is a select, auditioned ensemble for students with exceptional vocal tone, range, acuity, and overall musicianship. The boys sing in a variety of languages and styles in two, three, and four parts. They maintain an active rehearsal and performance schedule. Boys in the Celebrantes rehearse as members of the Centennial Singers and as a separate vocal ensemble.

Haverford choral ensembles perform on our Centennial Hall stage at least twice a year. They have a long tradition of performing at neighboring schools, nursing homes, retirement communities, and senior centers. Additional performances have included appearances at The White House, the State Capitol Rotunda in Harrisburg, Lincoln Center, the Academy of Music, and with local community choirs.

The Glee Club is primarily an Upper School Ensemble that performs a repertoire of songs in three and four. Students learn the technical aspects of good singing, including breath control, formation of vowel shapes and vocal tone, proper diction in a variety of languages, range extension, and agility. Students study repertoire from a variety of genres, from classical to folk to jazz and modern. They perform a capella music as well as music accompanied by piano and orchestra.

Glee Club members participate in service learning through outreach performances. This chorus performs at four major concerts each year at Haverford, in New York City, and in our community. The Glee Club joins forces with area girls' schools and with Haverford's boychoir to perform works such as Vivaldi’s Gloria, Handel's Messiah, and Haydn, Mozart, and Schubert Masses.

The Notables is the premiere Upper School vocal ensemble at The Haverford School. An auditioned vocal ensemble, students sing a variety of a capella music from around the world. Students refine the proper use of their voice, enabling them to sing music of great complexity and vocal range. The Notables perform music in a variety of musical styles, with emphasis placed on historical and stylistic performance practice techniques. Students sing in balanced voice parts, and sing music with up to eight parts. They sing in a number of languages and memorize a substantial repertoire for performance. Additionally, elements of stage deportment, ambassadorship, and community service comprise a significant part of ensemble study.

The students rehearse extensively and perform at school and in the larger community. The Notables are committed to providing community service through artistic performance. They perform numerous concerts each year with the majority performed at hospitals, nursing homes, and senior centers. The ensemble frequently produces recordings. Students are evaluated on their level of artistry, coachability, memorization skills, and adherence to performance practices of the various styles in which they sing.

Studies report a high correlation between students' improvement in mathematics and reading skills and their participation in music classes taught according to the Kodaly Concept of music education. The Haverford School was one of the first schools in the country to adopt this approach. 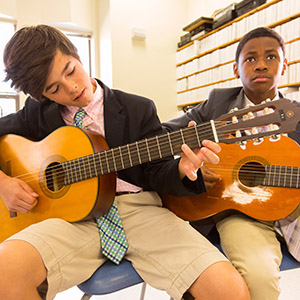 Fix You: A Tribute to First Responders

Inter A Cappella Concert
Good Ol' A Cappella
The Nylons

I Want You Back
Jackson 5

In Dreams
Fellowship of the Rings