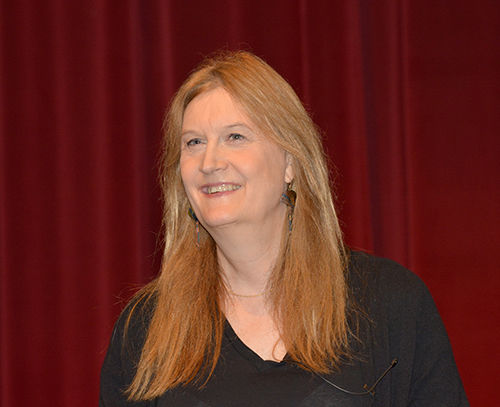 Professor Jennifer Finney Boylan, a member of The Haverford School Class of 1976, shared stories about identity and acceptance; the power of literature; and the enduring relationship between students and teachers; at the annual Hallowell Literary Lecture on Feb. 22.

After being recognized as the first alum to serve as Hallowell lecturer, Boylan acknowledged former classmates, as well as former faculty Edward R. Hallowell and Steven Dahl, who were seated in the audience.

Boylan shared two pieces she wrote for The New York Times. The first was published as "Bring Moral Imagination Back In Style" in July 2016.

"The root cause of so much trouble in the world stems from our lack of interest in imagining what the experience of being human is like for people who are not ourselves," she said. "Too many people ... are met with hatred and ostracism because whoever and whatever they are is something that others have never been compelled to imagine."

Making progress as a community and society must start with this ability to accept the differences in others, and being kind and loving to people whom you may not understand, according to Boylan.

The second piece she read, "The Catastrophic Restoration," was about Boylan's experiences in graduate school with professor John Barth. A version called "A Twist in Her Plot" was published in The New York Times Book Review in April 2016.

As a preface to the piece, Boylan acknowledged Hallowell as "the teacher who woke me up." He taught her the skills of storytelling and narration, and nurtured her love of literature and poetry.

"He showed me that literature and a sense of humor could literally save your life," she said, showing the audience the copy of The Major Poets that she first acquired in Hallowell's class in 1975. "This book has traveled around the world with me and still has a place on honor on my desk."

Barth's lessons about revision and reinvention built on her love of storytelling and narrative first learned at Haverford.

"Barth taught me less about creating fiction than how to invent myself. The most important way I found of making sense of my life was seeing it as a story, by finding the thread of narrative that brought sense and reason to what otherwise felt like chaos," she said.

Boylan spent the next day with Haverford students reminiscing about memories on campus and sharing the importance of the moral imagination and embracing differences in themselves and others.

She told students: "There is something that stands between you and the person that you will become. You're going to have to find your courage to slay that dragon that keeps you from becoming yourself. How will you find that courage? One of the best tools is the education you're getting here – that's what saved me."

Professor Jennifer Finney Boylan has authored 15 books and is the inaugural Anna Quindlen Writer in Residence at Barnard College of Columbia University. A novelist, memoirist, and short story writer, she is also a nationally renowned advocate for civil rights. Boylan's new novel, Long Black Veil, is forthcoming in April 2017. Her 2003 memoir, She's Not There: A Life in Two Genders, was the first best-selling work by a transgender American. She is a contributing opinion writer for The New York Times and the national co-chair of the Board of Directors of GLAAD.