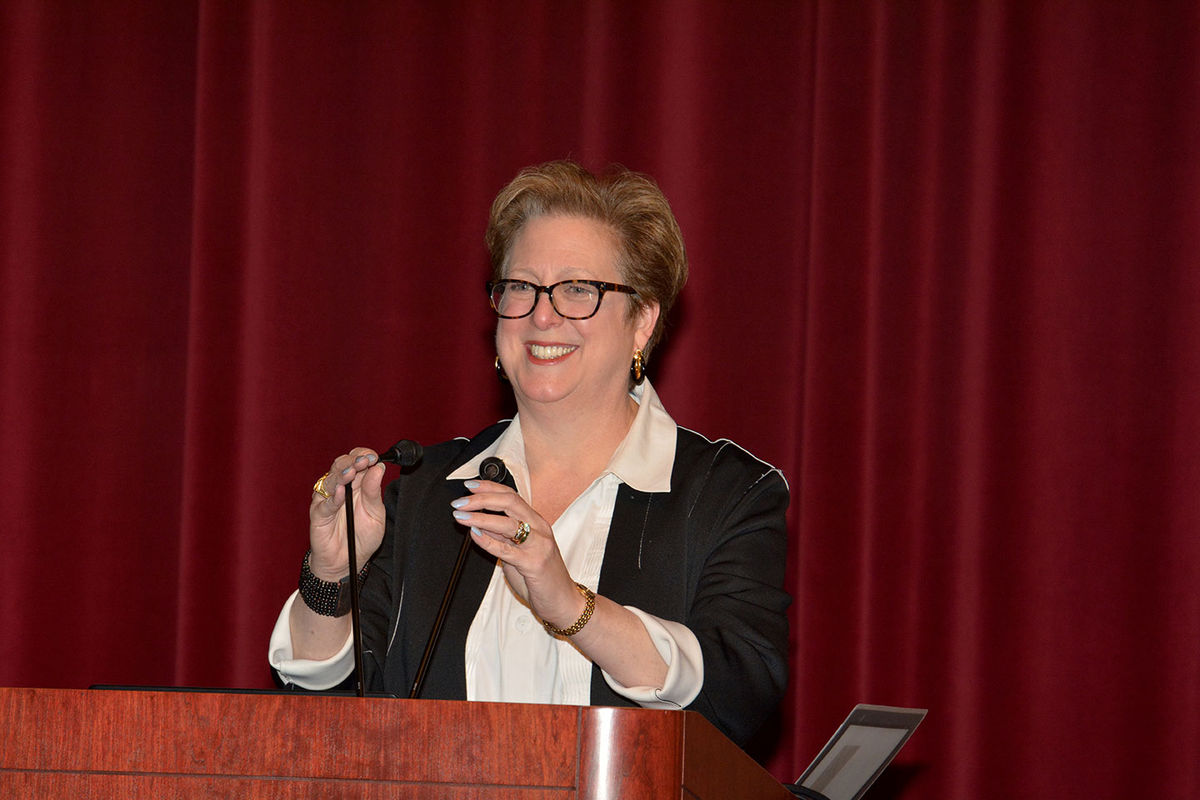 "You are the generation that can make a difference," Caryl M. Stern, President and CEO of UNICEF USA, told the students of The Haverford School during the annual Joseph T. Cox Servant Leadership Symposium on Feb. 1.

Stern traced her own career path and shared the lessons she learned about leadership skills and service to others along the way. She spoke of growing up with a mother, uncle, and grandfather who had fled Nazi-occupied Vienna in the 1930s for the United States.

"If not for a woman who volunteered to take two children she barely knew over an ocean, my mother's life would not have been saved, and I would not exist today," she said. "My mother told me at a very young age that one person can make a difference."

UNICEF has about 12,000 staff on the ground in 190 countries and territories, and the organization "does whatever it takes to save a child, anywhere in the world, and then to make sure that child actually gets a childhood," Stern said.

She shared some humbling statistics. "As you sit here, 50 million children are on the move, and 15,000 children under the age of 5 will die today of causes we already know how to prevent," she said. She challenged the students to take this information and make a difference.

Stern urged the students to use their voice, more than their fundraising dollars, to change the world. She shared details of a UNICEF program called KidPower that enables American children to get active and raise points to unlock food packages for children around the globe. She also urged them to use their existing clout in organizations and platforms in which they are already members.

"You, your generation, will dictate how the world communicates," she said. "You hold that power. You are the ones that will set a course for the rest of the world. We need you to scream that voice from every mountaintop, and not to forget that it is human interaction that is truly going to change our world."

"I think what stood out to me most about Caryl is her belief in kids helping kids," said Bill Brady, Director of Leadership Programs. "We often put speakers in front of our community who are amazing and inspire the boys with visions of what they can do down the road. Caryl spoke to the boys about being part of something bigger than themselves. We preach that leadership is something that you do, and in her words and actions, we hope that it will inspire action and purpose immediately."

Stern ended her talk by recounting a story of meeting a child refugee and his sister, who was carrying a baby, at a camp in Jordan.

When she gave the little boy a biscuit, she expected him to hide it from others and eat it himself. Instead, the boy split it in half to share with the baby, in what Stern called "the most magnificent, beautiful act of humanity I have ever seen."

"I challenge you with that story," she told the students, "because if this child who had so little could share it, imagine, as you go off into the world, what you can do."

Caryl M. Stern is the President and CEO of UNICEF USA. Stern is an activist, author, executive, public speaker, mother of three and grandmother of two. A dynamic change-maker, Stern has dedicated her career to helping others through education, compassion, advocacy and rolling up her sleeves. Since 2007, she has served as President and CEO of the UNICEF USA, an organization that supports UNICEF's lifesaving work to put children first.

Watch the full presentation on our Vimeo page >