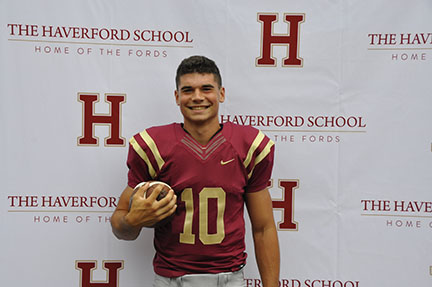 In June, the National Football Foundation (NFF) and College Hall of Fame announced its inaugural NFF 2019 Team of Distinction, which honors 82 high school football players around the United States as part of the NFF’s mission to promote the scholar-athlete ideal. Ben Gerber ’19, who served as quarterback and a team captain for Haverford’s football team, was named one of the 82 winners.

Gerber was chosen from a pool of over 3,500 scholar-athletes. Nominated by the NFF Philadelphia Chapter, he was honored for his 4.54 GPA, as well as his status as a National Merit Commended Scholar and a member of the National Honor Society.

As part of the award, all of the honorees will be part of a permanent digital display at the Chick-fil-A College Football Hall of Fame in Atlanta, GA.

Read the entire press release from the NFF here >